WHY I LOVE HER

It’s Monday evening, and we’re at the Fox Theatre in midtown Atlanta, enjoying a performance of Ravel’s Bolero by the The Sofia Symphony Orchestra and Chorus Ballet Arabesk.

Yes, Elisson and the Missus do put on the Culture Hat every so often.

And most of us are familiar with Ravel’s Bolero, which was used to masterful effect in the soundtrack to the movie 10 back in 1979...with the semi-unfortunate result that Bolero has been regarded as The Ultimate Shtup-Music for the last quarter-century. I’m sure we can’t blame Blake Edwards for this, if for no other reason than the fact that any piece of music that starts off quietly and builds to a resounding climax in fifteen minutes is going to be Metaphorically Fuckly.

Me, I prefer the shorter, punchier - but amazingly faithful - Frank Zappa cover, from The Best Band You’ve Never Heard In Your Life. It clocks in at 5 minutes, 18 seconds - right on the money, if you get my meaning, if you catch my drift.

But my point in this post (and yes, I have one) was not to blather on and on about Musical Analogies for Ficky-Fick.

It was to say that, in the midst of all of this carefully choreographed Dancy-Business, the Missus leans over to me and says, sotto voce, “Doesn’t this remind you of The Ministry of Silly Walks”? 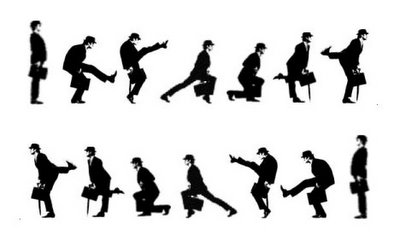 How we managed to watch the rest of the performance without (1) Laughing Out Loud, or (2) Pissing Ourselves, is beyond human understanding. Is it any wonder why I love her?
Posted by Elisson at 10:56 PM