Beheimah, in case you were wondering – sure you were! – is the Hebrew word for Domestic Animals. Horses, cows, oxen, et alia.

Once upon a time, the Family d’Elisson owned a horse. No, really!

The Mistress of Sarcasm, back in her Snot-Nose Days, somehow developed an interest in riding. She worked with a trainer for several years, and after a while we took the inexorable next step of leasing one horse, then another. And then Morris William, brother of She Who Must Be Obeyed, came forward with a proposition.

Morris William and his wife Rebecca, you see, are in the business of raising Arabian horses. And they had one – a yearling – that they were prepared to sell us for an attractive price. So we took the plunge and bought us a Real, Live Horsie.

Buying a horse is a little like buying one of those fancy-ass Gillette M3 Turbo razors. It ain’t the initial cost that gets you, it’s the upkeep. Batteries. Razor blades - at two bucks a pop, yet. And the upkeep on a horse can be steep...not to mention the additional expenses of tack, boarding fees, training, show fees, und so weiter. But it was worth it all to see the Mistress in her first Class A Horse Show.

We showed Mi Anam – for that was the big fella’s name - in plenty of places. The Texas State Fair. The Houston Livestock Show and Rodeo (pictured). It was Big Fun. 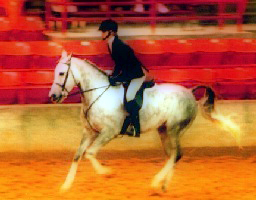 When we moved to Atlanta, Mi Anam came with us.

We managed to secure a boarding stable just a mile from the house and negotiated a good deal on the boarding fees. Part of our arrangement was that we would see to the feeding and stall-mucking ourselves. The Mistress held up her end of the deal – she’s the one who did the stall-mucking – but oftentimes, it was me and She Who Must Be Obeyed who handled the feeding end.

Once in the morning and once in the evening, one of us would go over to the stable and lob a pad of hay into the feed bin, followed by a scoop of feed. When the feed supply ran out, we would go to Ye Olde Feed and Grain Shoppe and pick up a 50-lb sack each of oats and sweet grain. Oof.

It was our practice to feed the horse first and to have our meal afterward. Why? You may well ask.

Just to set the record straight, I am a speciesist. I believe that homo sapiens is the preeminent beast on the planet by virtue of his intelligence and tool-making ability. Except for the occasional attack by wild beasts, we’re at the top of the food chain - which means we get to eat or exploit the animals below us. But there’s a huge difference between exploitation and unnecessary cruelty, and that’s where our Big Fat Honkin’ Brains, which are capable of understanding moral distinctions and ethical behavior, come to the rescue.

I read an interesting post by Amanda at customerservant.com that speaks of the commandment (mitzvah) to emulate Divine compassion. Boiled down to its essentials, the key principle is that of walking “in the ways of The Compassionate One, for the Divine benevolence and compassion extends to all creatures...” Closely related to this is the prohibition against cruelty to animals – tzaar baalei chayyim. And whether you’re a religious person or not, the way you treat animals is going to be closely related to the way you treat your fellow humans.

We fed the horse first – just as we feed the cats first – because the horse cannot feed himself, and the thought of us enjoying a hearty breakfast while our horse milled about, famished, in his stall, was unacceptable. In like wise, it’s hard to justify slurping hot coffee and chowing down on the morning Colon Blow when the cats are meowing piteously for their skeevy dry kibble.

And so, when we arose in the morning, the first question was, “Whose turn is it to feed the beheimah?”

We sold Mi Anam several years ago, the Mistress having gone off to college and having moved on to other pursuits. But we still have our cats, and the first question we ask each other in the morning is still, “Whose turn is it to feed the beheimah?”
Posted by Elisson at 2:00 PM