Now that Grizzly Man, the Werner Herzog documentary about the late self-styled naturalist Timothy Treadwell, is available on DVD, the Assembled Multitudes at Chez Elisson all got a chance to see it.

It’s a strange movie, filled with gorgeous scenic vistas and remarkable photographs of wild animals in their natural habitat. It’s also a meditation on the monomaniacal folly of one man, alternately sobering and hilarious. Sobering, because Treadwell paid the ultimate price for his folly. Hilarious, because, well, the man was a fucking nutjob. Unintentional comedy, to be sure, but Jee-Zus, was this guy amazing.

Werner Herzog deserves a huge amount of credit for fleshing out this portrait of what was clearly a very strange, very unusual, very driven man. Using Treadwell’s own video footage, Herzog constructs a three-dimensional picture of Treadwell, with all his passion as well as his absurdity. It must have been a challenge, avoiding the all-too-easy potshots. The trick to this movie was making sure Treadwell did not end up appearing too ridiculous.

Let’s face it. You have here a man who would warble ecstatically while resting his hand on a steaming pile of bear shit: “This was just in her! This came out of her butt!” OK, sure, but, Tim, it’s shit. And bear shit ain’t any better than human shit unless Size and Partially-Digested Berry Content are virtues.

It’s easy to dismiss Tim as an Enviro-Lefty Nutjob, but I’m here to tell you that more serious environmentalists, lefties or no, would consider him as a borderline psycho. You can see the paranoia growing; you can see the increasing tendency to be hostile to (most) other humans. Tim, perhaps, did not want to be human. Or he was unhappy with the human he had been, and found comfort in his new-found identity as a Lover of Bears.

The bears, alas, did not love him back. They were not friendly men in bear suits, at the end of the day - they were dangerous wild beasts. Treadwell himself often commented on how dangerous they were, but it is questionable whether he really took his own words to heart. In the end, he - and his girlfriend - suffered the fate one could say he deserved...possibly the fate that he really desired.

Back in August, when the movie first came out in theatres, I wrote a few snarky haiku about Mr. Treadwell. My cruel little poems still ring true, albeit in a minor key:

Oh, Mr. Choc’lit -
Hold me in your warm embrace.
Nibble on my face.

Bears are so cuddly.
Look at that one, cuddling Tim
In his intestines.

Bears shit in the woods.
It’s their nature - what they do.
Tim Treadwell: Bear Shit!

You have followed in the footsteps of other humans who, in the fullness of time, have had close encounters with Grizzly Bears. For the delectation of my Esteemed Readers, I provide some possibly familiar examples below, courtesy of Warner Brothers and the great director Robert Clampett: 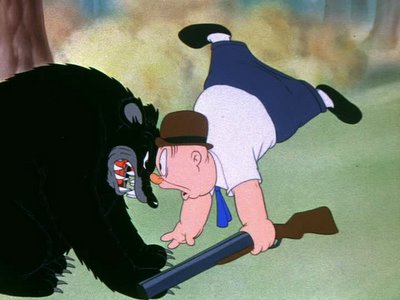 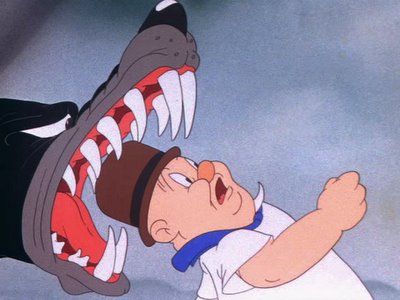 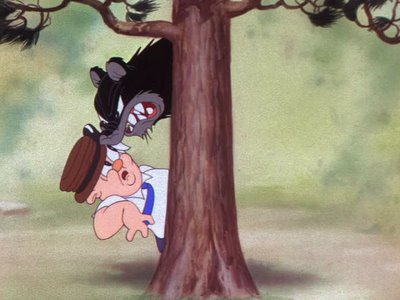