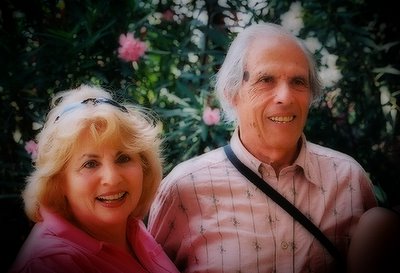 Dad and Toni. Photo taken last May on his 80th birthday.

Yesterday, my Dad - Eli, his ownself - and Toni celebrated their fifteenth wedding anniversary. Fifteen years, being a Year That Is Divisible By Five, qualifies as a Major Anniversary.

Their marriage is now old enough to get a Learner’s Permit in the State of Georgia.

Dad and Toni are celebrating their Big Day by piling in the car and driving to their new winter home in Florida. It will be two full days in a sedan packed with luggage - six months’ worth - and Sam, their Reclusive Cat. Then, it will be several days of Arranging Crap: telephone installation, appliance delivery, all of the Fun Stuff attendant on establishing a new household. They’re a little nervous and a lot excited.

Meanwhile, I wasn’t sure what the Traditional Fifteenth Anniversary Gift was. I mean, I know the third anniversary is leather, and the seventh is Molded Rubber Devices (Batteries Not Included), but I was drawing a blank on fifteen. Papier mâché? Prunes?

But thanks to the kind offices of Google, I was able to establish that the traditional gift on the fifteenth wedding anniversary is Crystal. Modern-thinking sorts may also consider Watches...although, when you think about it, a watch does have a crystal, doesn’t it?

[Not that they will see any crystal from me...except maybe for the vase their flowers come in. For we have arranged for flowers to arrive at their new pied-à-terre in MiddleofFuckingNowhere, Florida the day after they do. Flowers always look good...for a few days, anyway.]

Happy Anniversary, to the guy who provided me with a loving home, a fine education (in so many things!) and 50% of my DNA - and to the lady that is the apple of his eye and the light of his life. Health, happiness and love for many, many more.
Posted by Elisson at 3:50 PM