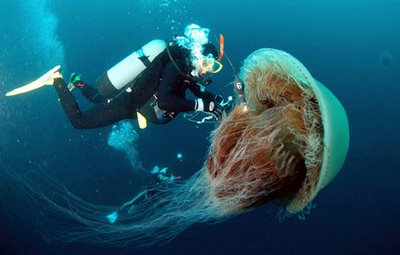 is Damn Scary. The Jellyfish as Big as the Ritz!

At first I thought, “This has gotta be Photoshopped. No frickin’ way this is real!”

But if it’s fake, then it’s fooled the biggies of the MSM.

Seems that there has been a veritabobble plague of these giant jellyfish - Echizen kurage, or Nomura’s Jellyfish - visited upon the shores of Japan this year. CNN.com reports that

...representatives of fishing communities around the country gathered in Tokyo on Thursday, hoping to thrash out solutions to a pest that has spread from the Japan Sea to the Pacific coast.

“It’s a terrible problem. They’re like aliens,” Noriyuki Kani of the fisheries federation in Toyama, northwest of Tokyo, told Reuters ahead of the conference.

If SpongeBob Squarepants were a real personage, he would be shitting himself in fear upon hearing of the existence of these Big Fellas. Almost as scary as that other jelly...you know, the one from Kentucky.

[Tip o’ th’ Elisson fedora to Philip at The Blue Sloth for the link.]