For the past couple of days, a Meat Jones has been building up within me.

I don’t eat nearly as much Red Meat as I used to. It tends to afflict me with sluggish digestion, a logy disposition, and a case of the Lard-Ass. Fish, therefore, makes up a significant proportion of the protein content at Chez Elisson.

Take today, for example. My friend Irwin was observing the Yahrzeit of his father-in-law, and, by local custom, he invited the attendees of the Morning Minyan to breakfast. It’s a way to thank the people who ensure that a quorum of adult worshipers is present so that one may say Kaddish for one’s relatives on the anniversary of their passing.

But as the afternoon rolled around, that Meat Jones could not be denied, and so, I began preparations for a Beefy Dinner.

As a before-dinner treat, I whipped up a couple of Blueberry Pomegranate Martinis. You get your full day’s ration of antioxidants and Vitamin E (ethanol) with these Bad Boys. To make one, take a cocktail shaker full of ice and add two shots of vodka and two shots of Pom blueberry pomegranate juice. You can play around with the flavor of the juice – plain pomegranate, cherry pomegranate, or mango pomegranate – and with the vodka. I’ve used Stoly Rasberi with good results.

Add a squeeze of lemon juice, shake well, and strain into a chilled Martini glass. Serve with a lemon twist. Looks like a Girly-Man drink, sez you? Don’t be fooled. This can lay you low in a hurry. 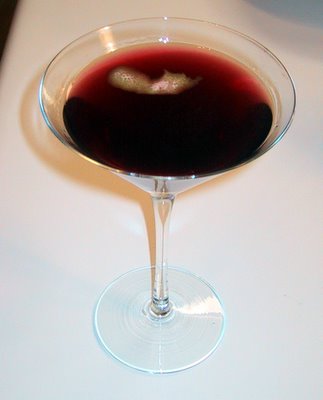 Now to pan-grill those steaks. I coat ’em with a sprinkling of kosher salt and freshly-ground black pepper, then some ground thyme. (SWMBO gets no thyme on hers…she is notoriously averse to herby flavors.) Toss ’em in a hot pan with a little olive oil, and let ’em sizzle. 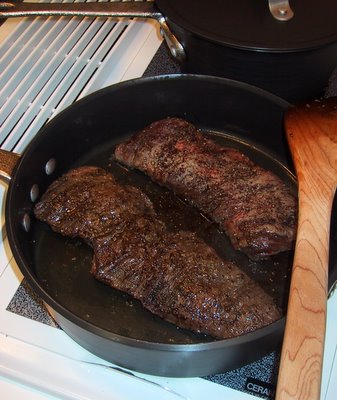 Once the meat is sufficiently done, I remove it to a waiting plate. Into the pan goes about a quarter-cup of chopped shallots, which I cook down until they’re soft and have absorbed all of the yummy meat juices from the pan. This then gets dumped on top of the steaks.

The green beans and pilaf finish up right on time. To the table they go, alongside the Meat Platter. 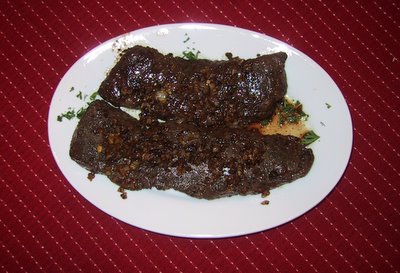 The Missus adds the perfect lagniappe: a half Haas avocado, nice and creamy-ripe, with a little fresh pepper to set off the mellow flavor. And thus we sit down to dine, just the two of us. 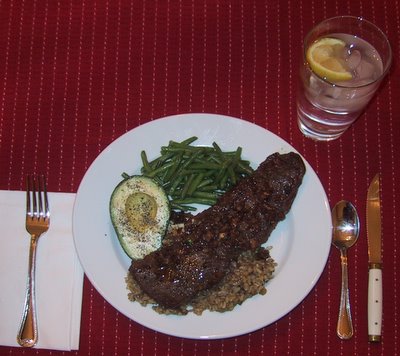