Last Saturday evening, She Who Must Be Obeyed and I descended on the local cinema to see director Tim Burton’s take on Roald Dahl’s classic children’s novel, Charlie and the Chocolate Factory.

I normally take a dim view of remakes, no doubt due to years of disappointment. It’s mostly a no-win situation. Who in their right mind sets out to remake a bad movie? And if a film is good to begin with, why bother to remake it? 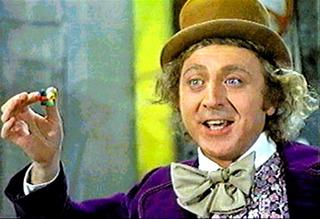 Gene Wilder, AKA Willy Wonka the First.
The answers are semi-obvious. Hollywood likes the safe bet, which is why sequels are so (excessively) popular. Why risk a huge investment on an unknown property when a sequel will be, if not as good an investment as the original, at least a predictable portion of it? Similar logic applies in the case of remakes.

Films based on The Classics, of course, are remade frequently, and nobody bats an eye. That’s why they’re the Classics, stories robust enough to withstand being told in many voices and with many visions. Nobody makes too much noise when Yet Another Version of Les Misérables, Wuthering Heights, Little Women, or Frankenstein surfaces, because there’s always a little more meat that can be gnawed off those Old Bones.

And, once in a while, the evolution of technology, or changes in society, add value to a new envisioning of old subject matter. War of the Worlds comes to mind. Here, the story itself (a Classic, true) has a different resonance today than when George Pal made his 1953 version. We’re no longer in the Cold War; we’re in the post-9/11 period, the initial stages of World War III. The same story affects us differently, and new effects technologies make the 2005 version very different from the earlier film.

But mostly, remakes suck. Think Psycho. Think King Kong (although I still hold out some hope for the Peter Jackson film currently in the works). Think The Time Machine, remade in 2002 with excellent effects but with a ridiculous, pumped-up backstory. Feh. And think Rollerball. Now, there’s a movie that was crying out to be made yet again.

So it was with some trepidation that we bought our tickets and entered the Local Cinema.

Our verdict? Not bad...but disappointing.

As a visual feast, Tim Burton’s film works well. Love him or hate him, he is (to me, anyway) the exact right director to take Dahl’s book and slap it up on the Big Screen. And the film captures Dahl’s book well: in many subtle ways, it is a more faithful rendition than the Mel Stuart “classic,” Willy Wonka and the Chocolate Factory. Gotta love the blink-and-you’ll-miss-it homage to Edward Scissorhands, too. 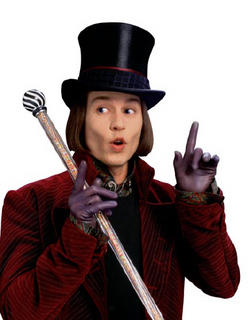 Johnny Depp, AKA Willy Wonka the Second.
Freddie Highmore is an excellent Charlie, effectively conveying the essential sweetness of the character, and David Kelly (from Waking Ned Devine) makes a wonderful Grandpa Joe.

But it’s with Johnny Depp that the picture makes its big miscue.

Don’t get me wrong, I think Depp is a genius. But his portrayal of Willy Wonka lacks the core of warmth that Gene Wilder brought to the role back in 1971. His is a cold, weird Wonka, haunted by inner demons thanks to a backstory of Parental Chocolate Angst that was not present in the novel. And the physical and vocal resemblances to Michael Jackson, whether intentional or no, are...disturbing. More than a little creepy, his Wonka gives me the Willies.

In the last analysis, the newer Chocolate Factory is still very much worth a visit, but it’s not the same place you may remember. It’s missing some warmth and feeling. It’s missing a neshumah – a soul.

I walked out of this movie feeling pretty good...but the old Willy Wonka and the Chocolate Factory never fails to moisten my eye and bring a lump to my throat at the end. This one did not - and that, Esteemed Readers, is all the difference.
Posted by Elisson at 9:35 PM