NEWS OF THE BIZARRE BEZOAR

The Bloggy-Sphere is a many-splendored place.

With tens of millions of blogs out there, the whole range of human interests is represented somewhere out there, if you look hard enough. There are political blogs and religious blogs, fearlessly covering the two subjects that should never be discussed in polite company. There are food blogs, pet owners’ blogs, gun owners’ blogs. Military blogs. Garden blogs. Sex blogs, covering the full gamut of behaviors and desires from shoe fetishism to Boo-Cocky (a condition in which one can only defecate when frightened by a sudden noise).

If you want a freak show, you can go here, the next best thing to News of the Weird. Read all about the freaks in Gibsonton, Florida. Learn about the short, blighted limbs (and equally short, blighted life) of Lobster Boy. Javelin through the foot? Posted a (now-expired) link. Axe in the head? Got it. Octopus-Girl? Hell, yeah.

But this, even V-Man does not have. Yet.

Submitted for your approval, the story of an eighteen-year-old woman who was admitted to the hospital complaining of abdominal pain, weight loss (about 40 pounds in five months), and vomiting after meals.

A quick peek with the old esophagogastroduodenoscope - a tube shoved down your throat until it reaches your small intestine - told the tale. The girl, who had had a lengthy history of eating her own hair, was suffering from a trichobezoar: nothing less than a Honkin’ Big-Ass Hairball.

Our cats get these all the time, since they groom themselves by licking their fur. And when they get one, they will, like as not, harf it up onto the rug. But in this young woman’s case, the damn thing was huge, 15" x 7" x 7", pretty much filling up her entire stomach. The thing weighed ten pounds and had to be removed surgically. Here ’tis, courtesy of the New England Journal of Medicine: 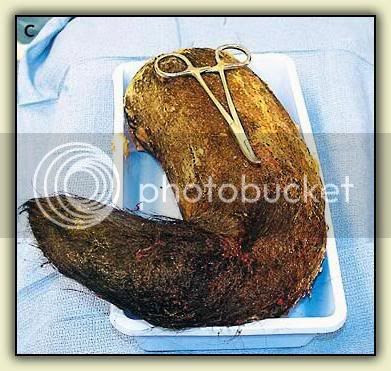 Bezoars, of which the trichobezoar is but one type, are not all that rare, especially in ruminant animals: cows and the like. They can be composed of organic or inorganic matter. In days past, bezoars were thought to have medicinal properties and were much sought after as a universal antidote for poisons. Some bezoars even were considered gemstones: the Nine Pearls of Vedic tradition are thought to be bezoars that attained the status of sacred objects. And it makes sense, in a way. Pearls, a natural product of the oyster, are considered precious. Why not the even-rarer intestinal blockages of the elephant?

Here you have an eighteen-year-old woman who grew this Monster Hairball - complete with snazzy kink at the end - thanks to a diet that included liberal helpings of her own hair over a period of many years (“Part of this nutritious breakfast! And lunch! And dinner!”) Five days after her surgery, she was reportedly able to eat normally. And it’s now a year later, and she has managed to put back on about 20 pounds.

Sure, she says she no longer eats her own hair. (I should hope not, not after having that fucking thing carved out of her kishkes.) But what about all the other trichophagics out there? What can we do to help them break their revolting and potentially life-threatening habits?

We need a Spokesman.

The USDA Forest Service has Smokey the Bear and Woodsy Owl. Muscular Dystrophy has Jerry Lewis. We need a Spokesman.

Just as Walt Disney was inspired to create a lovable cartoon character - an American icon, no less - from vermin, so can I create the next great American icon from...a revolting gastrointestinal mass. The spokesman for the Disease that Dare Not Speak Its Name...mainly ’cause it’s hard to talk with a mouthful of hair. 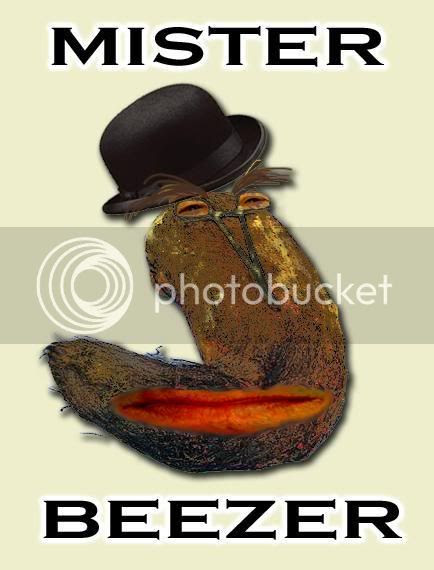 “If you don’t want to die,
Don’t have that second slice of Hair Pie!”

That is completely disgusting.