CAPTAIN JACK (WILL GET YOU STUFFED TONIGHT) 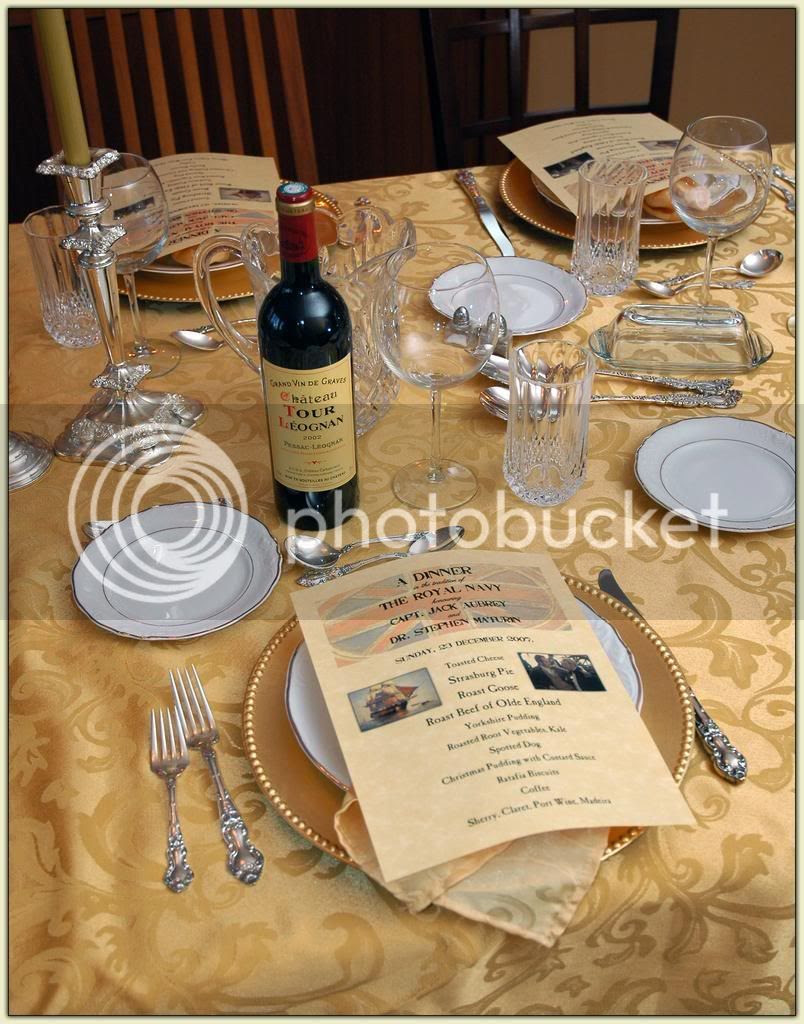 The Table...set for a dinner in British Royal Navy style, circa 1810.

This past summer, acting on a whim, I borrowed a copy of Patrick O’Brian’s novel Master and Commander from Houston Steve.

I had seen the 2003 Russell Crowe film of the same name, the one that was cobbled together out of several books from O’Brian’s canon, and I had read the occasional post at Velociman’s site that made reference to Captain Jack Aubrey. And so I was curious to learn more about Captain Jack and his particular friend, Dr. Stephen Maturin.

Within less than three months, I had read the entire series of Aubrey/Maturin novels: twenty in all.

Possibly owing to O’Brian’s peculiar writing style - the books themselves are written as though they were created contemporaneously with their main characters - the world of the Royal Navy during the period of the Napoleonic Wars became real enough to touch. And yesterday evening, in our own way, we took a step back into that world.

For in the course of plowing through Master and Commander and its nineteen sequels, I had discovered a most interesting book: Lobscouse and Spotted Dog: Which It’s a Gastronomic Companion to the Aubrey/Maturin Novels, by Anne Chatzinoff Grossman and Lisa Grossman Thomas. Inspired by O’Brian’s books, this mother-and-daughter couple researched and wrote a cookbook featuring typical recipes and dishes of the period. I promptly ordered a copy, which I passed on to Houston Steve once I had burned through it.

I’m not sure which of us got that special gleam in the eye first, the gleam that announces to the world that one is about to do something Spectacularly Bizarre but Fun, but in short order we both agreed that we would need to have an Aubrey/Maturin Dinner featuring at least a few recipes from the cookbook. Eventually, keeping in mind the fact that we would actually be eating the food, we settled on a menu that consisted of the kind of fare that would appear on the Captain’s Table. No foremast-Jack provisions for us, no burgoo or pease pudding - we would dine on great roasts and rich pies, followed by sumptuous puddings in the British style. 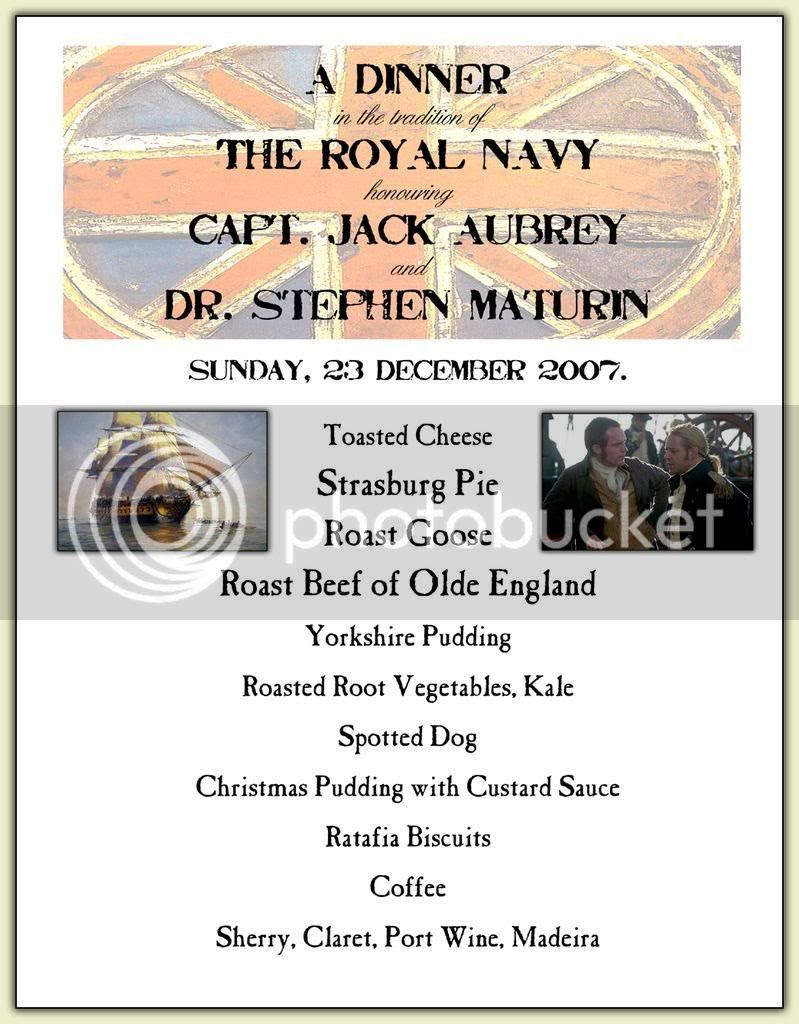 The Bill of Fare. Drool, Britannia! [Click to embiggen.]

What I will tell you is that the dinner we had yesterday, beginning at eight bells in the afternoon watch, was not just a reasonably faithful recreation of what Captain Jack Aubrey might have served his dinner guests (absent the servants and the pitching and rolling of a ship at sea), it was possibly the most cholesterol-laden, calorific, and costly meal I have ever had. There was enough Manly Provender to make Steve H. Graham scream like a little girl and run away. And it was delicious. 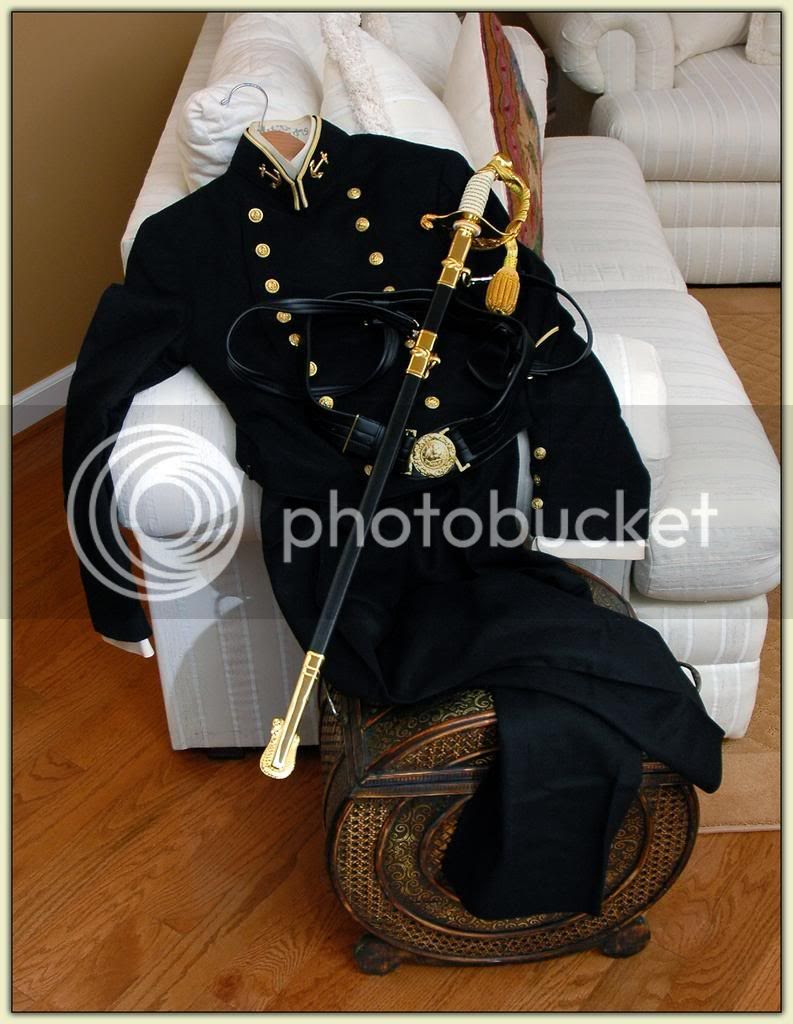 Houston Steve’s Navy uniform set the tone for the evening.

More below the fold...

The festivities started with a toast to Messrs. Aubrey, Maturin, O’Brian, and to the King’s health, with a glass of fino sherry - Gonzáles Byass Tio Pepe. The sherry was also a fine accompaniment to one of the starters, Toasted Cheese, an especial favorite of Captain Jack. Soft tack (bread) moistened with porter and buried in a lava-like mantle of bubbling, crusty Appleby English cheddar...what’s not to love? 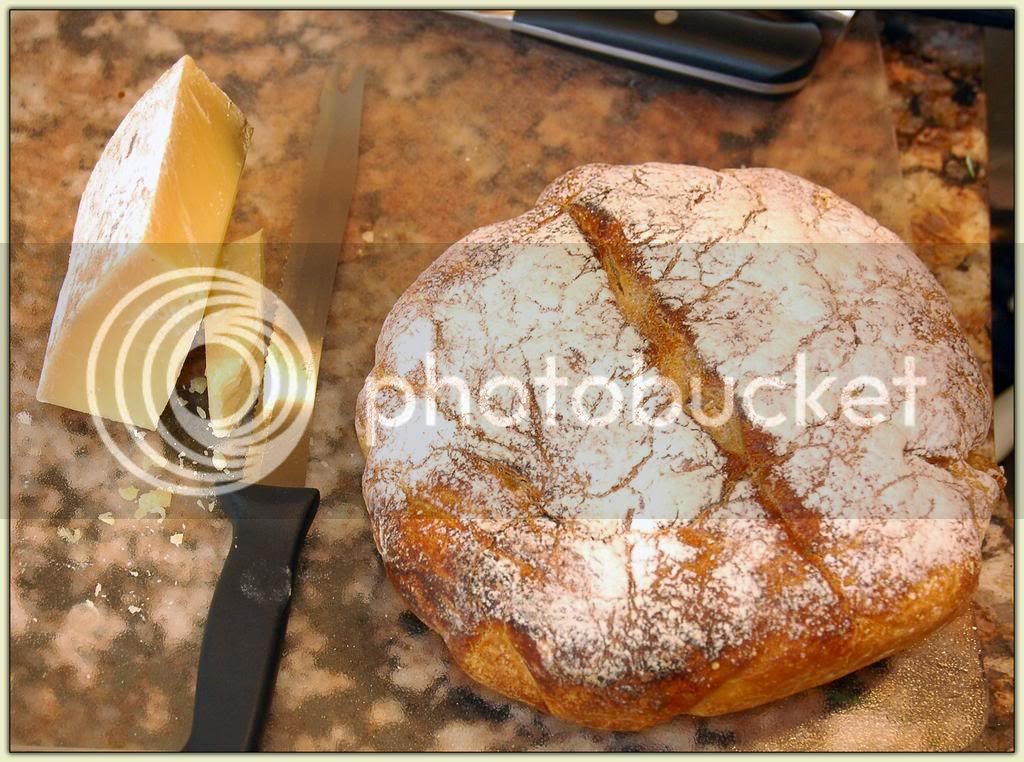 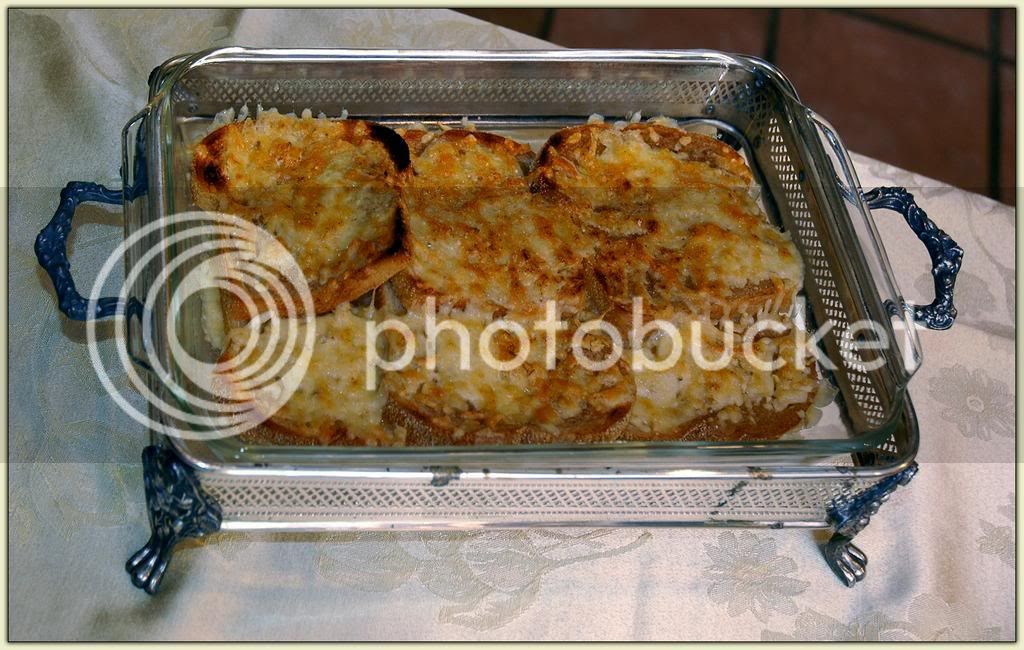 Also for starters was a Strasburg Pie, which is simplicity itself: duck foie gras crammed into a puff pastry shell along with about a pound of bacon. Foie gras - fatty duck or goose liver - is the sort of foodstuff that causes PETA supporters to have brain hemorrhages. It is Concentrated Decadence, something that combines extreme costliness and exquisite taste with a nutritional profile that will have you grabbing for your heart medicine after merely looking at it. To make the pie, I used a whole duck liver: Clocking in at almost two pounds, it represented a chunk of meat worth more than a C-note. 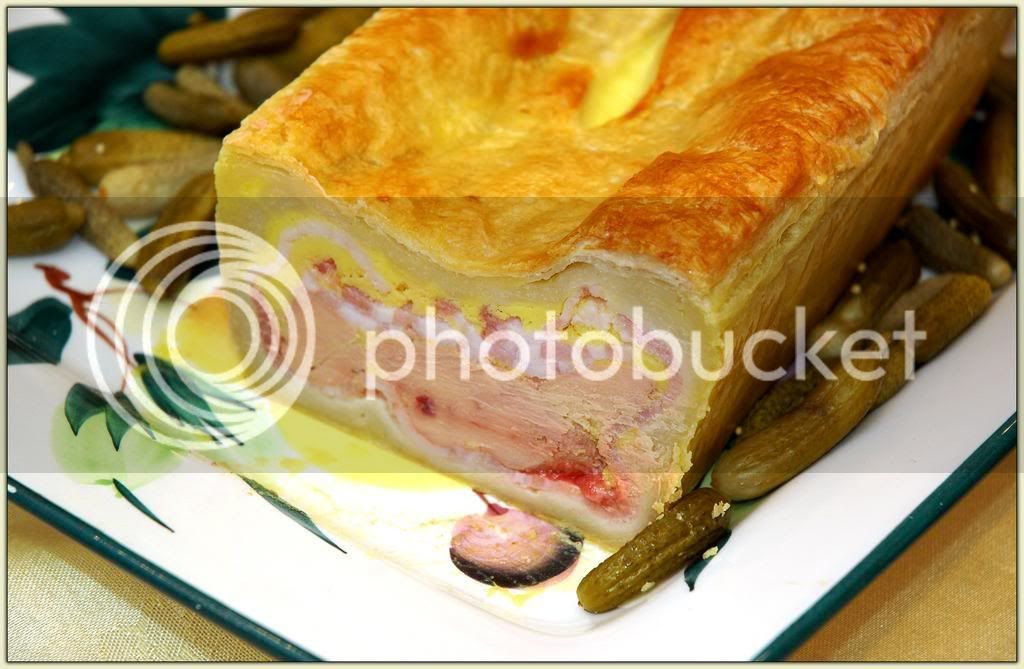 The most expensive pie you’ll ever have.

It was delicious, especially washed down with glasses of a 2004 Doisy-Védrines classed-growth Sauternes - the traditional accompaniment for foie gras.

You say you hate liver? No problem...more for me, and you’ve just saved yourself a bundle.

With the Toasted Cheese and Strasburg Pie having been disposed of, it was time to move on to the Main Event. Houston Steve had lovingly prepared a five-rib standing Roast of Beef by rubbing it with salt, pepper, and dried porcini mushrooms, next roasting it at high temperature to create a seared crust, then finishing it off slowly over the coals of the grill. 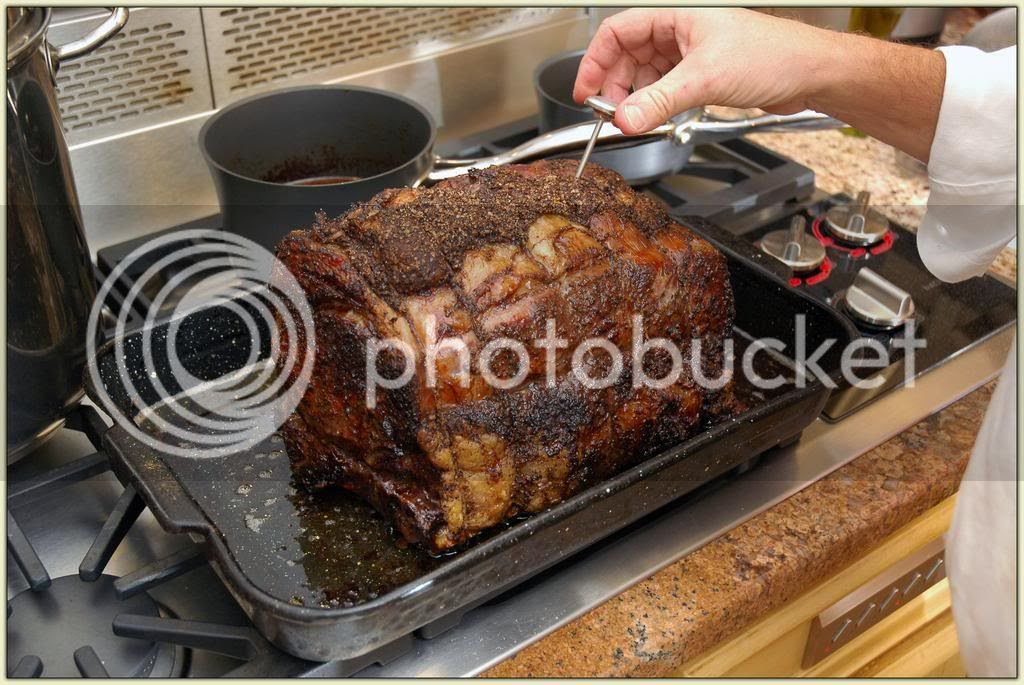 Once the gargantuan block of meat reached the appropriate internal temperature of ~130°F, Steve took it off the grill and tented it with foil. Meanwhile, he prepared the Yorkshire pudding, a confection of flour, eggs, and hot beef drippings that mainly serves to ensure that none of the cholesterol-laden Beef Schmaltz goes to waste. (And it’s tasty, too.) As the Yorkshire pudding baked - in individual muffin tins for ease of serving - Steve tended to an assortment of roasted vegetables, also done on the grill: Brussels sprouts, onions, carrots, parsnips, new potatoes, and beets. 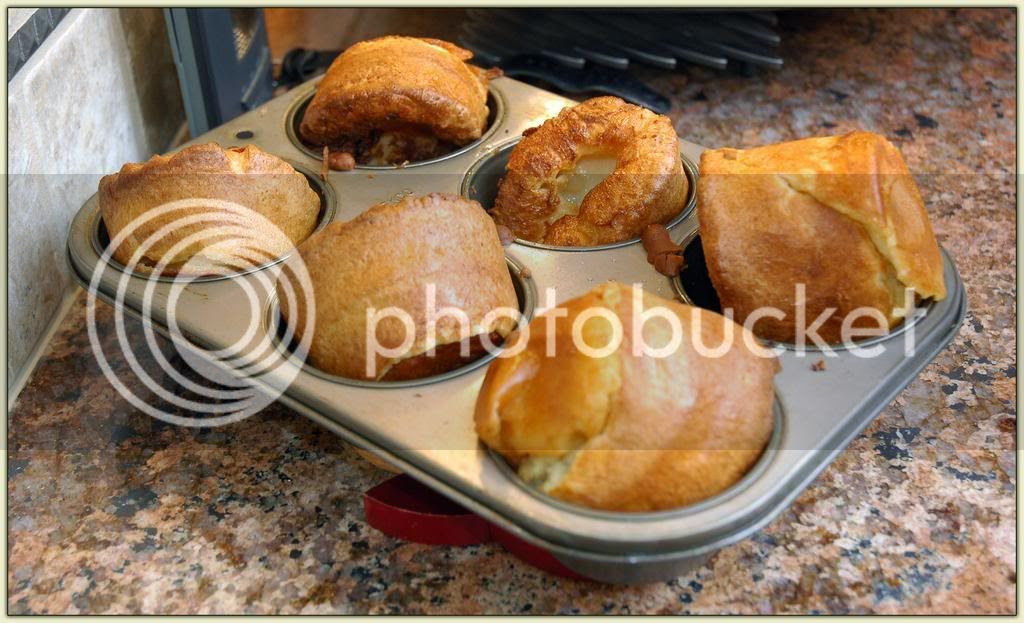 Since the humongous Roast Beef by itself did not provide an adequate overload of cholesterol, fat, and costly protein, I had roasted a goose as well. Have you ever eaten goose? Most people these days are unacquainted with this fine bird, owing to its Extreme Fattiness. But it’s a fine alternative to the ubiquitous turkey, and much more flavorful...provided you are a fan of the Dark Meat. If you like duck, you’ll love goose; if not, stay the hell away. 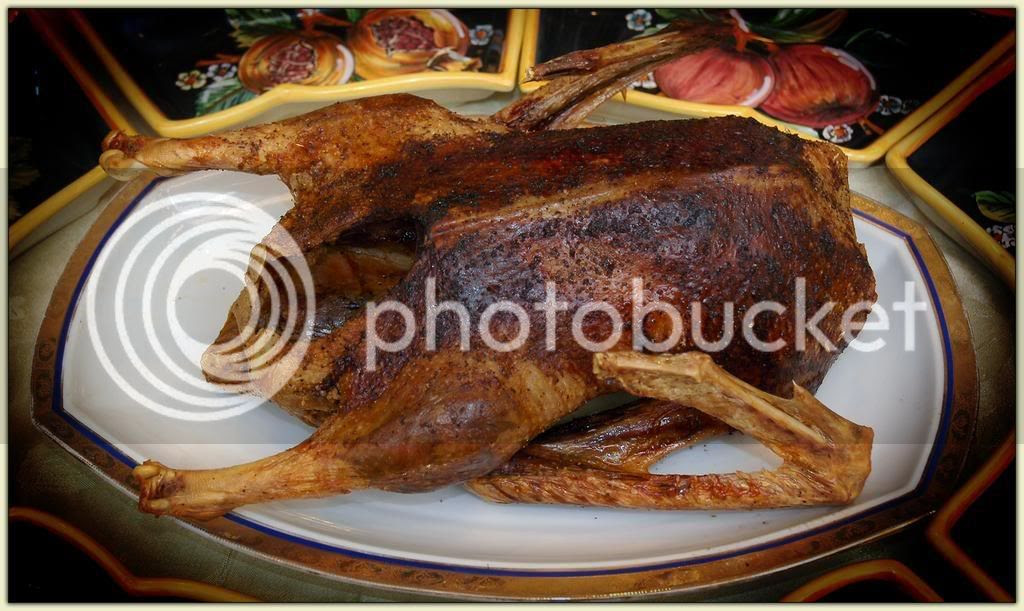 Our goose was cooked.

I had volunteered for the job of roasting the goose because, despite the minor annoyance of having to swab grease out of the oven, I was able to extract a full quart (yes, a quart) of Goose Schmaltz from the bird as it roasted over a five-hour period. As much as I like Duck Schmaltz as a cooking ingredient, Goose Schmaltz is even more...schmaltzy. I can’t wait for the next time I make Pommes Sarladière...or maybe duck leg confit.

With the goose I had made a giblet gravy, adding to the minced giblets some chopped carrots and onions (roasted in the goose fat), fresh basil, and Calvados. It set the goose off delightfully, as did the red wine reduction Steve had made for the roast beef.

So: Roast Goose, Roast Beef of Old England, and appropriate veg with which to accompany it, including steamed kale (another English tradition). All enjoyed with the mellow strains of “Roast Beef of Old England,” “Heart of Oak,” Locatelli, and Bach playing in the background, and glasses filled and refilled with claret - Château Tour Léognan Graves 2002 - and a fine white Graves of 2005.

“The bottle stands by you, sir!”

“A glass of wine with you, Houston Steve!”

“This is a most capital claret...let us drink to the King’s health!”

We ate and drank at a leisurely pace, the only way to survive such a massive influx of rich foods. Thus, we waited some time after gorging ourselves on the Dinner Proper before moving on to Afters. 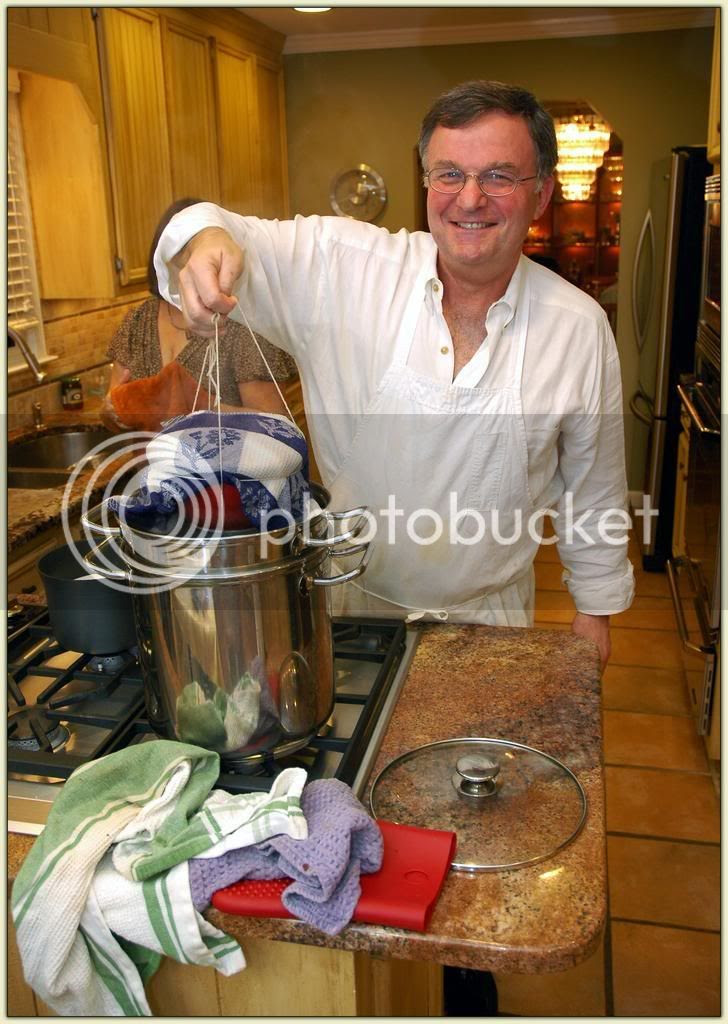 Houston Steve, being of English extraction, has the innate English love of the boiled Suet Pudding. His son Josh has inherited that love, as evidenced by his making - three months prior - the Christmas pudding that we enjoyed. Christmas pudding, it seems, is one of those things that improves with age, and is often prepared a year in advance of its planned consumption. It’s so densely packed with suet, dried fruits, and sugar that bacteria simply throw up their little hands in frustration and say, “We give up!” 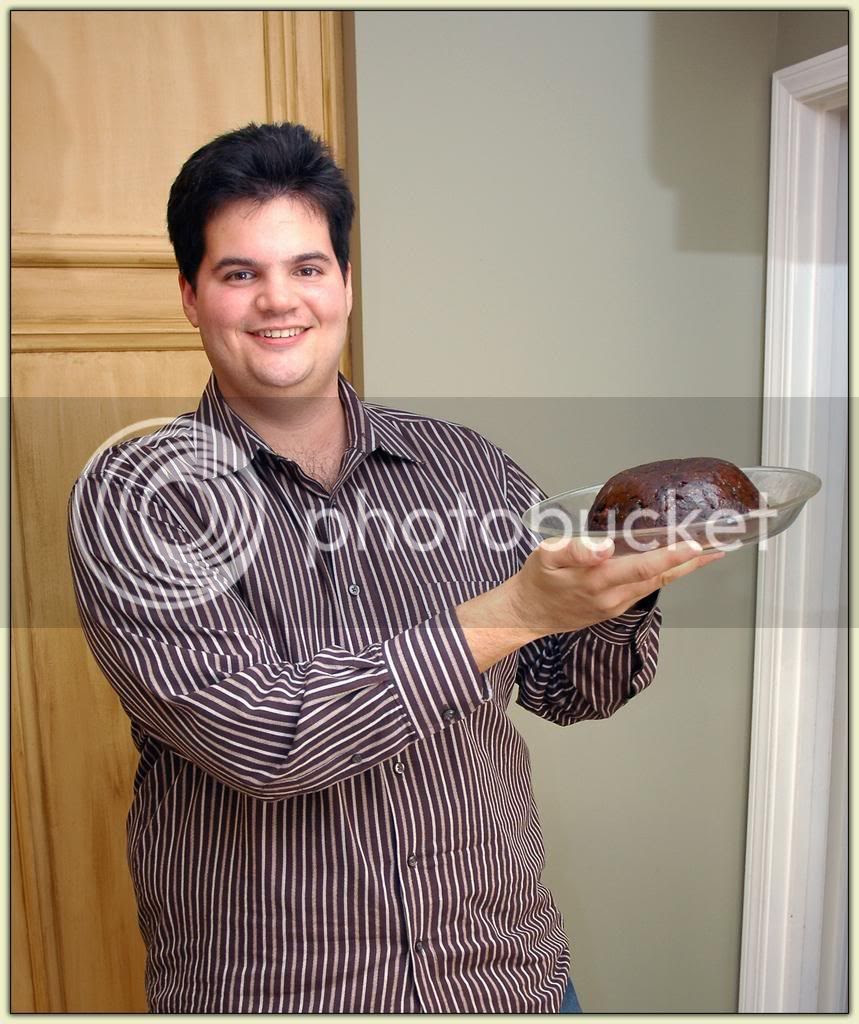 Josh shows off his Christmas Pudding.

Along with the Christmas pudding, Houston Steve had prepared a Spotted Dog. Also known as Spotted Dick, this is a suet pudding that is like nothing so much as a cake - albeit a cake made with beef suet in lieu of vegetable shortening or butter, and steamed for several hours instead of being baked. Laden with aromatic cinnamon and nutmeg, with dried currants to give it the proper spotted appearance, it was - surprisingly - quite nice. Of course, it didn’t hurt to ladle a few spoons of hot custard sauce over the Dog, or its darker Christmassy brother. 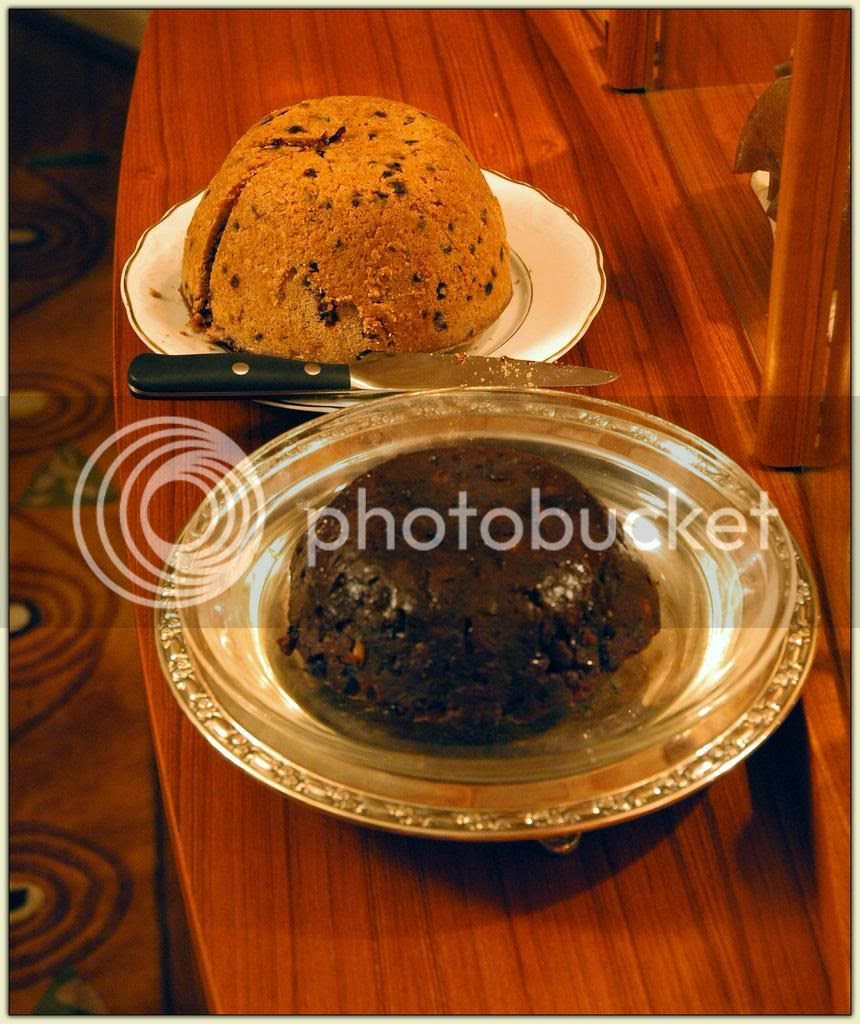 The Afters: Spotted Dog to the rear, Christmas Pudding in front. 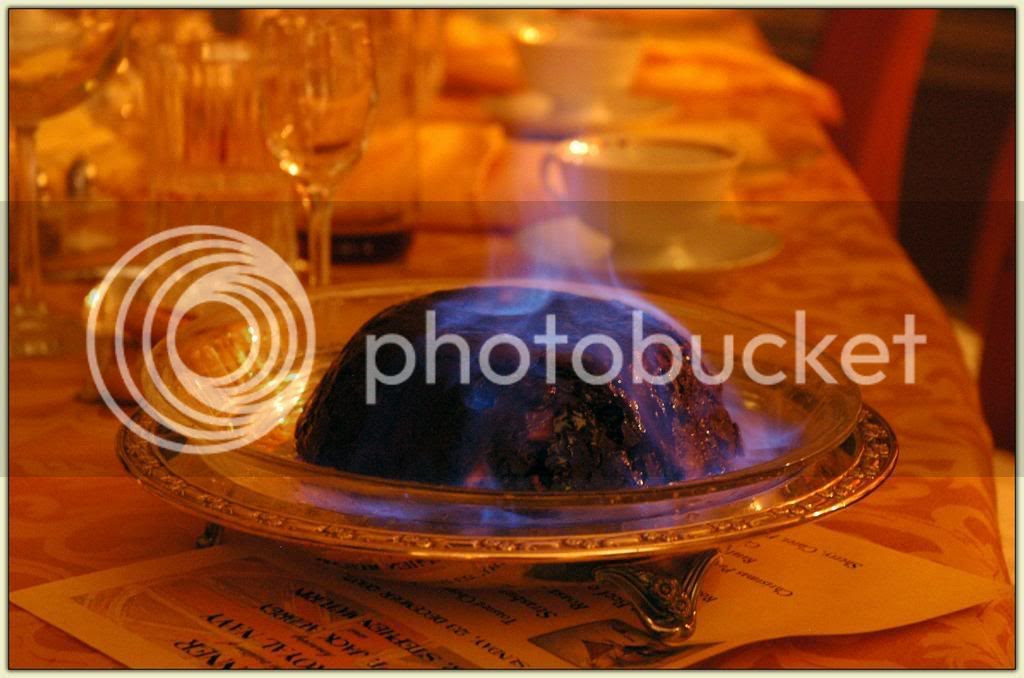 Helping to wash all of this down were liberal lashings of hot coffee, Warres Warrior Port, and rainwater Madeira (the Missus’s personal favorite). Almost as an afterthought, we trotted out the ratafia biscuits - which are pretty much the exact same thing as today’s Amaretti, little crisp macaroons made from sugar, egg whites, and apricot kernel paste.

Russell Crowe’s portrayal notwithstanding, Captain Jack Aubrey is described in Patrick O’Brian’s novels as a portly man of roughly sixteen to eighteen stone: 224-252 pounds. After this dinner, it was easy to see why the good Captain might have carried a bit excess avoirdupois. Oof.

Stomachs packed with provender sufficient for a normal week (and arteries packed with cholesterol sufficient for a normal month), it was finally time for us to go our separate ways. But as we walked out to our car, I could almost hear the bosun’s whistle, the sound of the feet of the foremast jacks scrambling to quarters, and the Captain giving the order to set the topgallant mast. And there was the faint tang of salt in the air, here in Cobb County, Georgia, hundreds of miles from the sea. I smiled...and tried to suppress a discreet belch. 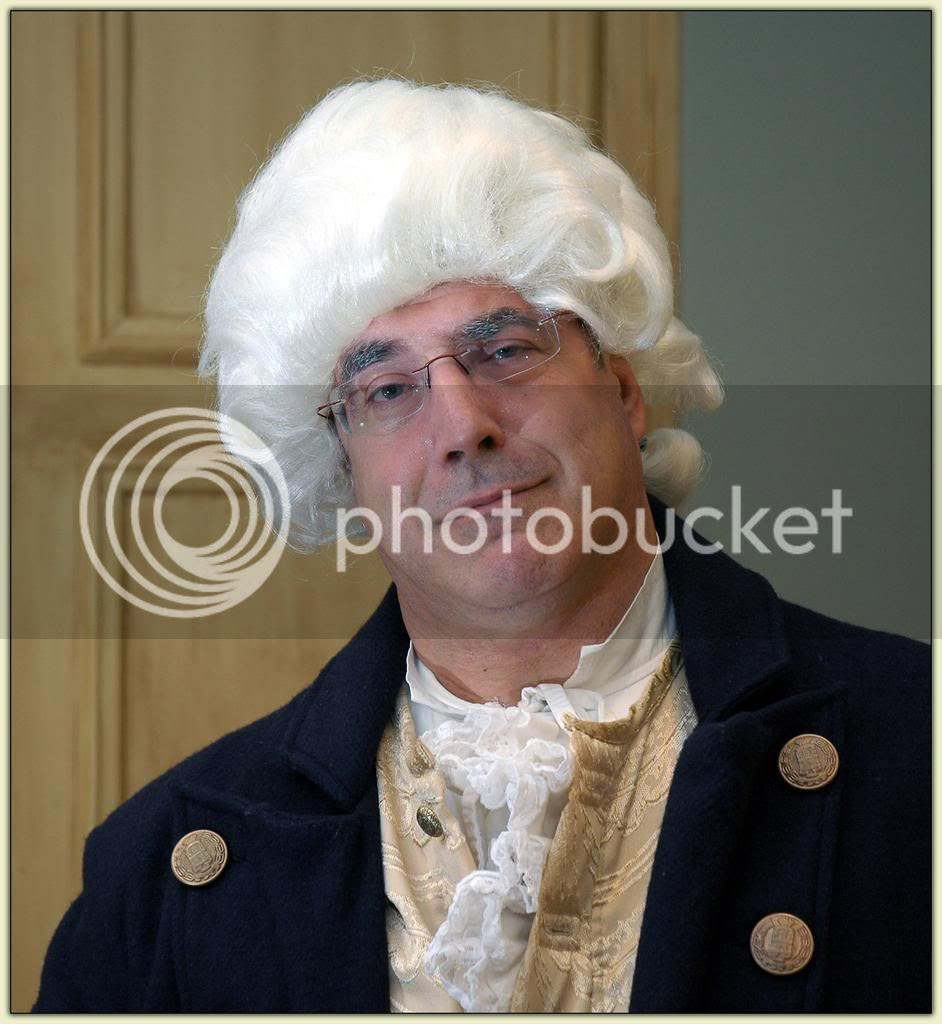 “I say, would you happen to have any Bromo-Seltzer?”

Everything looks so delicious :x

Good Lord, sir! But that was most enjoyable. A hearty meal meant to be heartily enjoyed!

I see it has been seven years since this post, so I will take a stroll around to see if there are other treasures, new or old, to be discovered.

I myself do a fair amount of period cooking, being a former AWI Brit soldier and officer. I have a whole shelf of cookbooks interpreting period recipes. I have to be a little more circumspect in what I myself eat, at 50 with heart and blood pressure issues.

But it is still a thrill to read and experience a period feast in this manner.

A glass of wine with you, sir?