Sunday morning, She Who Must Be Obeyed and I joined a few friends for a short walk along the beach in Santa Monica...a short walk that turned into a five-mile constitutional all the way down to the heart of Venice Beach.

On the return leg, we elected to go back via Main Street, where we discovered an astonishing piece of Public Art. 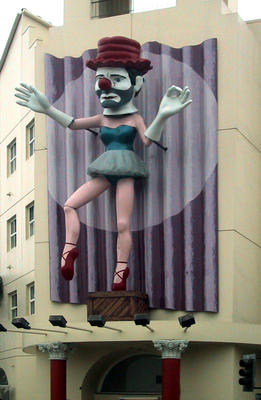 What fresh hell was this? Was it a Cross-Dressing Hobo Clown...a sort of Emmett Tranny? Closer inspection revealed that the huge, three-story high sculpture appeared to be a ballerina wearing a pair of white gloves and a clown mask. The building on which this Thing o’ Beauty was perched was vacant, but had obviously been something, once upon a time...but what?

A little Internet Research conducted upon arriving home revealed that the piece actually has a name: The Ballerina Clown, and was created by one Jonathan Borofsky. Now, that is a dude with some serious issues.

The building apparently used to house something called the North Beach Bar and Grill, now defunct. I would have loved to see what the menu for that joint looked like.

As if all this were not enough, when we arrived yesterday afternoon in Atlanta, we saw yet another piece of Public Art, this time in the North Terminal Baggage Claim. 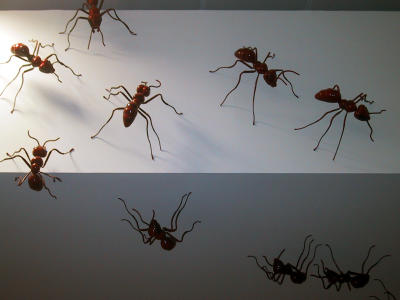 Huge red ants on the ceiling! Again, later research revealed that these (not so) little guys have been here a while, but unless you (1) happen to be at the North Terminal Baggage Claim by Carousel 1, and (2) look upward, you might miss ’em. And as many times as I had walked by that exact spot on the way to catch my Airport Parking Jitney, I had never noticed them before.

Our flight from LAX had arrived right on time, which turned out to be a lucky break. Minutes after we touched down, a huge thunderstorm struck the airport, immediately snarling arrivals for the rest of the afternoon with delays of up to two hours. We didn’t escape scot-free, though, as luggage offloading operations were shut down by the storm. We had a ninety-minute wait for our bags, which gave me plenty of time to think: Where had I seen those big ol’ants before?

And then I remembered a legendary episode of the old Outer Limits TV series... 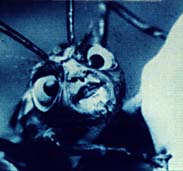