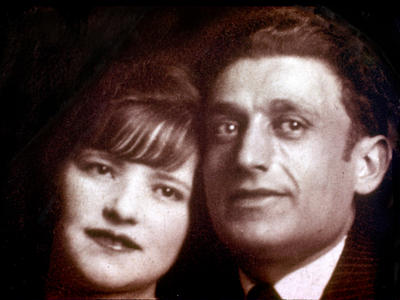 They came to America in 1922, as the great wave of Eastern European immigration was beginning to peter out. Smartest thing they ever did: all of the relatives who stayed in Europe were wiped out in the Holocaust.

She had been an actress in the Old Country, or so I’ve heard it told. Both of them ended up working in the garment industry in New York, living near Bay Parkway in teeming Brooklyn.

As a runny-nosed kid, I was fascinated by the stories Grandpa Jack would tell of his days serving in the Russian army during World War I, of platoons of soldiers fighting over a single bowl of kasha. He had a lump on the ball of his thumb, a scar left by a German bullet. I was mesmerized. My Grandpa, a War Hero!

In later years, Grandpa Jack would write poetry for the Day-Morning Journal, one of the Yiddish papers. His work would appear occasionally in a column called Der Krimmer Shpiegel - “The Cracked Mirror.” I have them all, in the original Yiddish and in translation, but most precious to me is a single sound recording, now forty years old, of Grandpa reading one of his poems. I can still remember sitting in his living room as he read the poem in his distinctive voice, and hearing it makes him come alive again, though he has been gone 35 years.

Regardless, here’s a piece of Grandpa’s work, in transliterated Yiddish and in (altogether inadequate) translation:

I cannot forget
My village, my homeland,
It’s etched into my memory
Like the number on my hand.

We had, back then, a house
With a large family.
I remain - alone -
With the number only.

A mark stays
With me always.
No matter where I go,
The number follows.

Now I am here
In the golden land.
But I'm reminded of the Shoah
By the number on my hand.

No more exists the village
From my native land.
For me a trace, a memory -
A number on my hand.
Posted by Elisson at 9:50 PM