Some time back, the question was raised by one of my Esteemed Blown-Eyed Blodger Buddies as to which method of Bunwad Utilization was most efficient.

There is, he posited, a choice between Waddage and Foldage; in his opinion, Foldage was to be preferred from an efficiency standpoint. Especially, quoth he, in the case of Malingerers and Detritus. True, dat: the Infernal Sticky Turd calls for extreme measures.

Of course, as such questions do, this one devolved to a Popularity Contest in the comments. So be it.

My own not-so-humble opinion? I am a Folder from way back. Coefficient of friction? No, it’s all about the surface area. Wad, and one swipe renders the bunwad useless for further action. Fold, and more Abstergent Surface is easily made available at need.

Wadding is the ass-wiping equivalent of lighting a cigar with a C-note. It’s profligacy, pure and simple, made even more wasteful because, unlike with most forms of Conspicuous Consumption, those whom you desire to make envious generally do not get to observe your spendthrift ways.

How you arrange your Bunwad is, of course, the sort of intimate training that is passed down from father to son, from mother to daughter. Strangely, in our family, there has been a fork in the road. The Mistress of Sarcasm is an inveterate Wadder, having learned that appalling technique from She Who Must Be Obeyed at an early age. Yet Elder Daughter is a Folder, owing to her having been caught in the act of wadding by her grandmother, the Momma d’Elisson, at the tender age of five.

“What the hell are you doing with that toilet paper?”

With that, my mother launched into a full-fledged Ass-Wipin’ Lesson, after which Elder Daughter emerged a confirmed Wrapper. Thus she remains to this very day.

“The Wrap?” you ask. That’s when you wrap your hand with paper in lieu of folding it, forming a sort of Shittin’ Mitten. It’s second only to the Fold in terms of Surface Area Utilization.

Herewith a Pictorial Guide to the various methods. 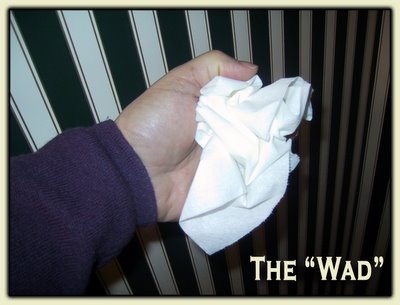 The Wad: Not recommended. 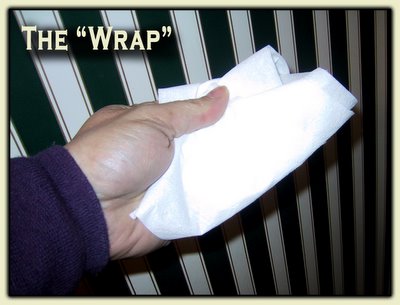 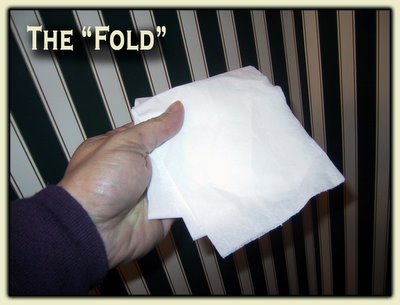 The Fold. Versatile and convenient. 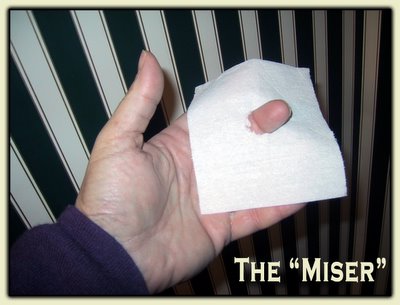 The Miser: for when Desperate Measures are called for.
Posted by Elisson at 10:45 AM