WINTER OLYMPICS ON THE CHEAP

Watching the Winter Olympics in a snow-shrouded Turin – or Torino, if you prefer – has been fascinating. I’m always amazed by the sheer technical difficulty of many of the events. Never mind that you’re not merely trying to avoid being killed, you’re also, in most events, trying to “git ’er done” faster than everyone else.

Downhill skiing, where you’re zooming down that hill at 80 miles per hour.

Speed skating, especially the short-track events, where almost every skating stride is a crossover and you’re leaning into those turns so hard, your knuckles are dragging the ice. Speed skates are fearsome implements, with razor-sharp blades only 1/32-inch thick, extending several inches in front of, and behind, the skate boots. You do not want to be run over by a speed skater, because if you are, you will look like so much sashimi afterwards.

Mogul skiing. Bad enough to deal with those fearsome bumpy slopes, but these nutjobs are careening through them at breakneck speed.

Snowboarding. Extreme sports come to the Olympics. The half-pipe events are scary enough, but the downhill races, complete with aerials, are downright ridiculous.

I can’t claim to be much of a winter sports enthusiast, but I’ve skied in the Northeast and in Colorado. My friend Walter was largely responsible for getting me to ski the first time, that being on a high-school ski trip to a horribly overcrowded Hunter Mountain in upstate New York. He was also responsible for my taking the chairlift halfway up the mountain, where I faced what appeared to be a vertical cliff covered with four-foot high moguls. Getting down the mountain took a long time and resulted in my being coated in a thick crust of snow and ice chunks...surprisingly, with all limbs intact. Years later, I would still be shaking my head in rueful amazement at the sheer foolishness of it all.

A few years later, when we were both college seniors, I spent a goodly portion of Winter Break with Walter at his rented house on the north shore of Long island. It was, in point of fact, the caretaker’s residence attached to some fabulous Center Island estate, Center Island being a tiny enclave of super-huge mansions accessible only by a single two-lane road that was vigorously patrolled by the local constabulary.

I set myself up in the ground floor bedroom, adjacent to a bathroom so cold that if you had to take a whiz during the night, you had to snap it off as each squirt froze in mid-air. I’m here to tell you that there is nothing finer than sleeping under heavy blankets in a cold room...and nothing that discourages getting out of bed more effectively.

The grounds were buried in snow that winter, and Walter, a twisted genius much like myself, devised an Infernal Contraption that could have doomed us both but for luck and swift reflexes. He took an old bicycle and replaced both wheels with skis, creating a perverse sort of Ski-Cycle. 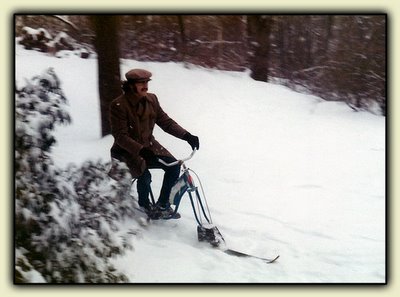 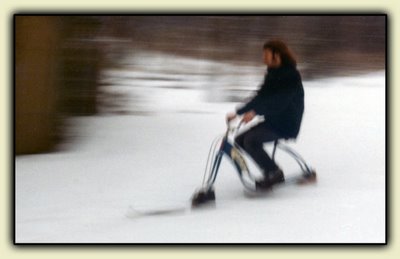 Walter, the Mad Inventor, careens down the slopes.

The Ski-Cycle provided hours of Stupid Amusement. You could steer it...a little. You could negotiate near-vertical drop-offs and boulders, albeit at great risk to Life and Limb. What you couldn’t do was stop it, once it started down any kind of slope.

Best of all, it was free. You rode down the hill, then you schlepped it back up the hill.

So as I look at all of the snowboarders, the speed skaters, and the downhill racers, I chuckle to myself. “You people may be fast, and you may be athletic. But you never rode on Walter’s Ski-Cycle of Death.”