RASHOMON GOES TO THE BLOGS

Many of my Esteemed Readers are familiar with Akiro Kurosawa’s classic film in which the same event is shown from different characters’ perspectives. With that in mind, here’s how I imagine a familiar story might be told from the varying viewpoints of several denizens of Bloggy-World.

Growing up in the South, we had no shortage of peculiar individuals. Only we didn’t call ’em that. They were always tetched. Or one rib short of a barbecue combo plate. If not loved, these Faulkneresque peeps were at least tolerated.

Which brings me to Mary.

Mary was one of those kids that even we third-graders knew was a little different. Skeery, even. Rumor had it, she kept a monkey at home in her room. A dead one. Under her bed.

One day, she showed up at school with an honest-to-God lamb. Wooly Bully, she called it, and said it was her pet.

The teacher went apeshit. Screamed for ten minutes about how all this was unacceptable, spittle flying ever which way. Meanwhile, the kids thought it was some sort of southern fried Mardi Gras. Pandemonium in the Velociclass, it was.

And that’s when the principal showed up with a rope. Hauled that lamb out of the classroom and disappeared down the hallway. A few moments later, we heard a wet “thunk.”

The hamburgers at lunch that day were especially good, tho a mite gamey. Nobody asked why.

... this morning I polished off a half-kettle of go-juice... went outside on the deck… the deck I had built with my own hands... and the fleece seat cover on which I parked myself reminded me of a story...

... seems we had a kid in class back in third grade that was a little different... every class has one, rubberneckers... yours did, too... anyway, she shows up one day for show-and-tell with her pet...

...it was a lamb, of all things... the teacher had a conniption fit... meanwhile, the wooly beast was in the eye of the hurricane... rampaging through the classroom, eating the textbooks...

...of course, we kids were enjoying the scene immensely... but when it grabbed hold of my collection of Robert W. Service poems, I had to act decisively...

...people, it was not pretty... not for nothing do they call that six-inch serrated blade a sheep-sticker...

This Blog Is Full Of Crap

In Houston, a third-grade student is suspended for bringing an unauthorized meat animal to school. 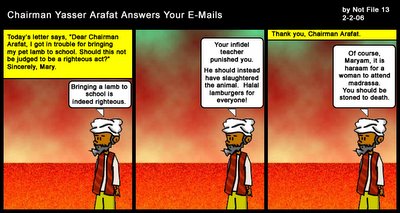 Thank you, Chairman Arafat. Roast lamb is indeed tasty. Of course, where you are, pretty much everything is roasted.

There was a story in the paper the other day about a third-grade kid who brought a lamb to school. Bejus!

When I was growing up in Kentucky, that kind of shit happened all the time. The teacher would scream and the kids would raise hell. But the principal had a sure fire method of handling the situation.

First time, the kid would get a warning.

Second time, the animal would be dragged off and shot.

Third time, the KID would be dragged off and shot. End of problem.

Now, they send the fucktard poor misguided soul to counseling to find out why her self-esteem is so low that she needs to bring her pet lamb to school. My aching ass.

At least it wasn’t a fucking CAT.

What Should Dax Do?

Yesterday, just as things were starting to get crazy during the lunch shift, a little girl came in with a sheep on a leash. The customers went nuts, and workflow came to a standstill with everyone gawking at the damn sheep. I told the kid to take her “friend” outside - health regulations - and then she started to give me static about it being a seeing-eye sheep. Also, it wouldn’t be a health hazard because its fleece was white as snow.

I don’t know what it is about me that I attract people with vision problems.

So here’s my dilemma. Let the sheep stay, and I might get shut down by the Health Department. Not to mention the general disruption the wooly bastard is causing. Kick the little girl out, and my customers might think I’m hard-hearted. I lose the kid and her family as customers, and I just might be facing a lawsuit if there’s any truth to the seeing-eye thing.

Yesterday, I let the kid stay, but it was a real pain in the ass. She’s coming back today. What should Dax do? 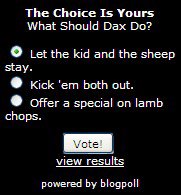