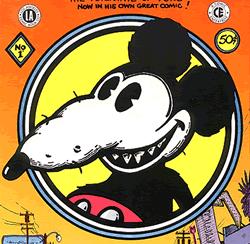 The Great Corporate Salt Mine sends out a daily Safety Brief as part of the normal flood of e-mail I deal with. Today’s brief featured a bizarre little story that had come over the newswires in early January.

It seems a New Mexico homeowner found a mouse in his house. He caught the little guy and decided to dispose of it on a pile of burning leaves he had going nearby. He then watched in horror as the flaming mouse ran back into his house and set it ablaze, burning it to the ground. According to the article in BBC News,

Luciano Mares, 81, of Fort Sumner, New Mexico, found the mouse in his home and wanted to get rid of it.

“I had some leaves burning outside, so I threw it in the fire, and the mouse was on fire and ran back at the house,” he was quoted as saying by AP.

Revenge may be a dish best served cold, but our mousey friend had other ideas.

There’s more to the story, of course. Snopes.com lists this story in their “Undetermined” status category, mainly because there are some conflicting accounts of what actually happened. The homeowner later claimed that the mouse was dead when he threw it on the fire, and the house was torched off by wind-blown embers. But it’s not clear whether he concocted that version of the story to appear more humane (throwing a live mouse into a funeral pyre is a tad outré) and later reverted to the live-mouse version in view of the amount of attention the story got, or whether that’s really what happened in the first place.

I would like to believe the mouse was alive and set the fire. Karma, and all.
Posted by Elisson at 10:23 AM