SNACKIN’ IN THE SIXTIES

Everybody’s got their favorite things to nosh on when the Snack-Jones strikes.

For some, it’s potato chips. When I was in my Snot-Nose Days, the choice was the salty, full-flavored Wise chips versus the more consistent Lay’s. Then, after a while, you got Ruffles, with those mysterious ridges. And then Pringles, those pseudo-chips made out of Tater-Based Styrofoam. Now, you have 5000 different flavors and styles of chips to choose from.

And you have your Pretzel Partisans. Soft or hard? Philly-style, big, soft, salty pretzels slathered with yellow mustard? Sticks or traditional shapes?

Tortilla chips, too. Tortilla chips eaten outside of a Mexican restaurant will usually fall short, but they’re just what you need to slurp up guacamole or your favorite salsa. Or Seven-Layer Dip, if you’re feeling adventurous.

And popcorn. Plain, cheesy, or caramel-coated? Remember Cracker Jack, with that useless, stupid-ass prize in each box? Oh, how we looked forward to getting deep enough in the box to nail that prize.

I was waxing nostalgic over a favorite from the 1960’s, one that is a Kissin’ Cousin to Cracker Jack. I refer, of course, to Screaming Yellow Zonkers, probably the first snack food that was deliberately marketed to the Freak Generation.

Screaming Yellow Zonkers were tasty enough, consisting of popcorn coated with a thin, mildly sweet, yellow glaze tasting vaguely of butterscotch. But it was that attention-getting name that made them interesting, along with the colorful, sixties-style package. You almost expected to get a free hit of windowpane acid as a prize in every box.

I’m thinking that SYZ’s might be a fun thing to bring to the next big Blodge-Meet. They’d be mighty tasty, washed down with lashings of Chatham Artillery Punch. And didja know they’re kosher? That’d be important if, say, Erica decided to make the journey. Me, I had no idea, until I saw their new magazine ad: 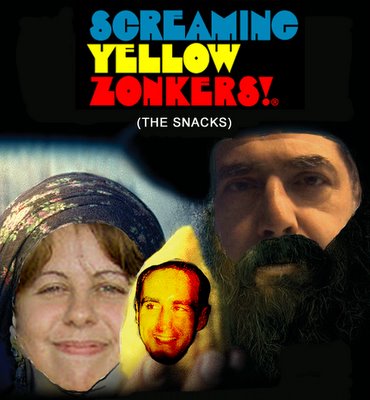