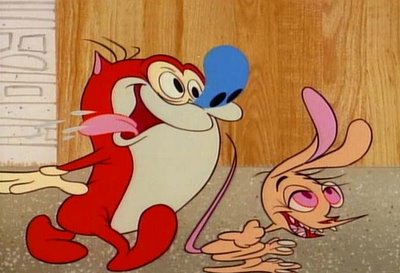 John Kricfalusi, the demented creator of (most of) these equally demented characters, is now writing a blog. It looks like he’s trying to demonstrate to potential financial backers that there is a wellspring of interest in his work, the level of which he is gauging by the number of comments he’s getting.

John is a raw, original talent. He’s extremely knowledgeable about animation - technique, history, the business - and knows what makes cartoons cartoons...knowledge that many animation people seem to lack these days. His stuff is generally too edgy to be really commercial, Ren & Stimpy (originally featured on Nickelodeon) a notable exception. But I keep hoping. After all, anyone who could create a cartoon superhero called “Powdered Toast Man” and feature him in an animated short in which he rescues the Pope (voiced by Frank Zappa, with a legendary ad-lib line) could probably do just about anything:

The Pope: Both of them?

I’m not sure if Ren & Stimpy will ever come back, but John has several other irons in the fire.

If you’re a fan of Seriously Twisted Animation, it’s worth visiting his site to see what he’s up to. Hell, the caricatures he posts by themselves make his site a worthwhile stop.

And as long as you’re visiting John, stop by Jim Smith’s site (“The Unofficial Spümcø Website”) to check out some of the other deranged crap Jim and John have collaborated on over the years.
Posted by Elisson at 9:34 PM