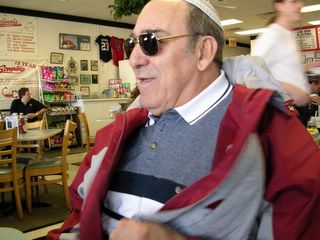 Here, Larry is in his element – at post-Minyan breakfast at the local Bagel and Smoked Fish Emporium. On any given morning, there would be anywhere from six to over a dozen of us at breakfast, but on any day that Larry was there – which was most days – it was pretty obvious who was the Grand Panjandrum...the High Priest...the Kohen-ha-Gadol. That last description fit Larry, a real Kohen, to a T.

“Ya wanna do something?”

That was Larry’s invitation to share a fish platter. Sometimes we’d split a baked salmon salad platter, sometimes we’d have a slab of baked salmon, and, when we felt adventurous, we’d go for the sable. Sable is not for the faint of heart; it’s an assertive, “fishy” fish, an acquired taste for some. But when Tommy was on his game (Tommy being the proprietor of the Emporium), it could be heavenly.

Larry was picky about his fish. He would go up and select the finest chunk in the case, not relying on the guy behind the counter to do the choosing for us. Never mind that there might have been an already-opened package of fish – if the best-looking piece were still in its plastic wrappings, out it would come. The Kohen ha-Gadol would rarely screw the pooch when it came to Fish Selection; he’d pick a winner almost every time. Years spent in the Food Service industry helped, no doubt.

For breadstuff (to accompany the fish, of course), Larry favored the Twist, a handsome loaf of bready goodness. Or he might request a bialy – which he invariably pronounced “bye-olly.”

At the breakfast table, Larry would hold court, and woe be unto the nekulturny slob who would dare to read a newspaper at the table. Breakfast was not a time for paper-reading. It was a time for Manly Gossip, for political discussions, for settling Important Religious Issues. We would pick apart the week’s parshah – the scheduled Torah reading – with Larry offering up bits and pieces of arcane knowledge he’d have picked up in his sedra classes with the Rabbi or in endless back-and-forth sessions with his son Reed. There’d be stories of his service in Korea, of which he was justifiably proud. Or his grandkids, of whom he also was justifiably proud. And there would be a sprinkling of filthy jokes, just to make it interesting.

The last time She Who Must Be Obeyed and I saw Larry in the hospital, we brought him a treat, hoping he would be able to enjoy it. It was a chunk of baked salmon and a “bye-olly.” He devoured every bite...and he smiled.

I’ll treasure the memory of that smile.
Posted by Elisson at 10:13 PM