I’ve already copped to having been involved in that most nerdly of youthful activities: Model Rocketry.

It’s hard to imagine anything that will paint you with the Nerd-Brush faster than flying rockets...unless it’s being in the Chess Club (not guilty), the Biology Club (mea culpa), any of the foreign language clubs, or the It’s Academic quiz-show club (mea maxima culpa).

The main thing the It’s Academic club had going for it - aside from the chance to make an ass of yourself on television - was that the faculty adviser, one Miss R-, was downright hot. A few years later (so it was rumored), she lost her job because she was caught shtupping one or more of the seniors on the football team. Not me, though. Damn.

But we were talking about Rocketry, weren’t we?

Aside from using rockets to test the effects of high accelerations on small animals – bugs, fish, and the like, none of which remained particularly healthy after being subjected to sudden decelerations of several hundred gravities – we started taking aerial photographs.

Nowadays, it’s fairly trivial to take pictures from rockets. Advances in small film cartridges and modern camera technology mean you can take razor-sharp color photographs – even movies – with minimal effort. Not so, back in 1966. Things were frickin’ primitive.

Our camera consisted of a small plastic cylinder that had a film holder, a lens, and a rubber band-powered shutter. In the darkroom, you loaded the film holder with a one-inch diameter circular piece of film. You placed it in the camera assembly, cocked the shutter, and removed the protective metal slide from the side of the film holder. You then fired the rocket, which would then activate the shutter at the peak of its trajectory (you hoped). When the thing landed safely, you would pop that protective metal slide back in, take out the film holder, and haul ass to your darkroom, where you would develop the negative. With chemicals ’n’ shit.

All of this was a Royal Pain in the Pachooch - but if things went well, and the rocket’s nose was pointed at something interesting (and identifiable) – you were happy.

Our first effort was a near-disaster. The rocket flew high and started heading straight down. The recovery system finally deployed about 20 feet above ground, barely enough time for the parachute to open before the whole mess augered into the hard ground. 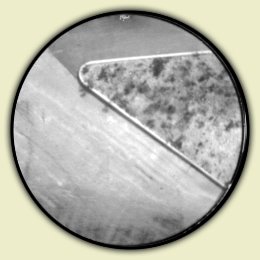 A later attempt was better, this time snapping a picture from about 150 feet up while aimed straight down. You can clearly see the car at the top of the photograph, about to turn onto the two-lane road. 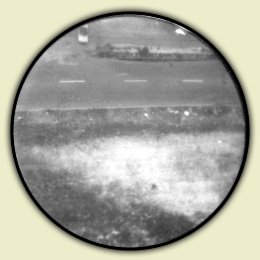 In the fall of 1966, we got a nice oblique shot of one of the local neighborhoods, having launched our projectile from the parking lot of an elementary school nearby. This photograph was picked up by the community newspaper, which in turn led to its being featured in a full-page spread in Newsday…and our subsequent exile to “Officially Sanctioned National Rocketry Association Launch Activities” once the shamuses found out what we had been up to. 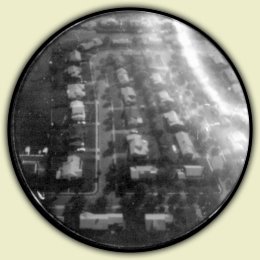 But not before we caught the shot below, which shows the area surrounding the Massapequa River. You’re looking south, with Joey Buttafuoco’s house somewhere on the left and Carlo Gambino (the Mafia don) somewhere off to the right. You can see a boat working its way up the river. 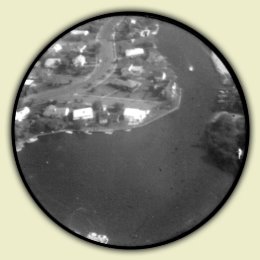 View of the Massapequa River.

Why, it’s practically a work of art.