VINTAGE TOYS IN THE ATTIC

Everyone remembers and loves the toys they played with as children.

When you get to a certain point in your adult life, the emotional pull of remembered joys gets especially strong. For most people, this takes place sometime around the fortieth year, the period that marks one’s irrevocable entry into Adulthood. For we can all pretend to be kids when we’re in our thirties; it’s when you get into your forties and fifties that you realize there is No Turning Back. It is in this vulnerable emotional state that the tug of Objectified Nostalgia becomes irresistible.

Whether it’s a Tonka truck, a doll, a Gilbert Chemistry Set, or (in my case), a two-by-four into which I had nailed an assortment of dials, springs, and other Metallic Gewgaws, nothing inspires a case of Galloping Objectified Nostalgia quite like a Vintage Toy. I suspect that the love of Vintage Toys is what powers the mighty engine of eBay.

And so, because I knew that a certain Gentleman of Wisdom was reaching an Important Birthday Milestone - thirty-nine years! - I did some careful reasearch to find a Vintage Toy that would ease his gradual transition into those Grown-Up Years.

And I think I found it. 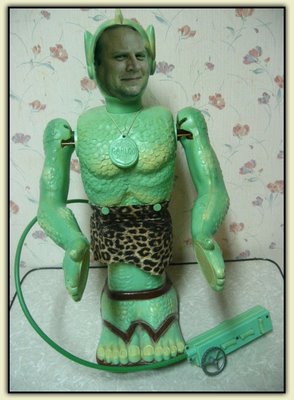