This is the story of five sisters.

Hendel, Ceril, Ann, Dorothy, and Helen, their names were, and they lived in a small city near Warsaw.

Times were tough for the sisters. Tragedy had struck their family early on, when their little brother – not much more than a toddler – was struck down by a horse-drawn wagon and killed. The local economy was not especially healthy. Poland was looking steadily worse as a place to live.

Hendel and Ceril, the eldest of the five, were married, and Hendel had already started a family, when their husbands decided to seek their fortunes in the New World. Hendel’s husband struck out for South America, landing in Argentina. Like so many of his compatriots, he could not afford to bring his family over; he would have to establish himself and earn the passage for his wife and child.

Ceril was more fortunate. Her husband had the resources to bring her over with him. His family, from all evidence, was somewhat well-off, as most of them emigrated at about the same time. And like Hendel’s husband, they settled in Argentina.

Meanwhile, back in Poland, Ann, Dorothy, and Helen continued to live with their parents. But the father, as had his sons-in-law, realized that Poland held no future for them. He left for America, and within a few months he had established himself in Kansas City and was able to arrange for passage of two of the remaining daughters. Ann and Dorothy were selected, most likely because they were old enough to earn a living.

They made the trip in 1928. Ann spent the entire eight days of the voyage being violently seasick. Meanwhile, Dorothy – then an irrepressible 16-year-old – partied constantly with the crew, providing early evidence of a feisty personality.

Several years later, when enough money had been saved up for two more steamship tickets, the father sent for his wife, and Helen, the youngest of his five daughters.

Hendel’s husband, meanwhile, continued slogging away at the task of earning passage for his wife and child. But when World War II began in the fall of 1939, he knew, to his horror, that it had taken too long. Hendel and her son were trapped in a Poland that had been overrun by the Nazis. They never made it out, swallowed up in ravening maw of the Holocaust.

In time, the three newly-minted American citizens got married and settled down, as was the custom in those days. Ann was widowed early, her husband dying unexpectedly when their baby daughter was three months old. In time, she remarried and moved away to Fort Worth. Husband Number 2 passed away a mere ten years later, leaving behind a seventeen-year-old stepdaughter and a desolate wife; after that, Ann did not marry again. Meanwhile, Dorothy and Helen stayed in Kansas City, raising their own families there.

In the early 1970’s, Ceril traveled to the United States and was reunited with her three sisters for the first time in forty-two years. Communication was a challenge. Ceril spoke only Yiddish and Spanish, Dorothy only English. It was Ann who remembered enough Yiddish to bridge the language gap and translate the conversations back and forth.

Some ten years later, when conditions in Argentina began to grow difficult for Jews, Ceril made aliyah, immigrating to Israel.

Ann suffered a massive stroke in late 1987. She lingered on in a semi-vegetative state for three more years, finally passing away in December 1990. Sister Ceril joined her in Olam ha-Ba - the World to Come – several years later.

Helen lives in suburban Maryland and is in declining health. Meanwhile, feisty Dorothy, now 94, still lives in Kansas City and only now is preparing to move from her private residence into an assisted living facility.

Our connection to the five sisters?

Ann’s little daughter – the one whose father passed away when she was three months old – is the Momma d’SWMBO. And Dorothy is the Great-Aunt with whom SWMBO and her mother spent this past weekend.

And here it is Monday evening, and SWMBO and I are visiting the Mistress of Sarcasm. She is the next generation, Ann’s great-granddaughter. She and her sister are the ones who will write the next chapter in the Story of the Five Sisters.

I wonder, though, about Hendel, the sister that was left behind.

I wonder about her child. He never saw adulthood, that little boy who never lived to have children of his own. Today nobody remembers his name, and only a sole photograph remains to show that he ever lived.

I wonder about the other children Hendel might have had. 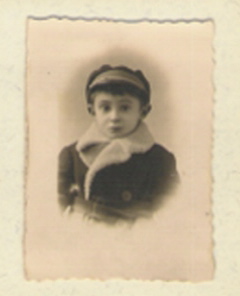