Many of my Esteemed Readers are familiar with the story of The Velveteen Rabbit, a stuffed animal that was the beloved toy of a little boy. The Velveteen Rabbit was not attractive to look at - in fact, to be completely honest, he probably was pretty fucking ugly - but that is only because the boy had loved him so much that, over the course of time, he became worn out.

At some point in time, the little boy moved on to other, newer, more attractive toys. Let’s face it, the Velveteen Rabbit looked like ass, and he could not compete with the shiny new Playstation with the Grand Theft Auto game cartridge. But, as the Skin Horse - another superannuated Toy Animal that looked like ass - explained to the Rabbit, the love of little children is what allows toys to become Real.

She Who Must Be Obeyed knows this phenomenon well. As a little girl, she had a stuffed Lambie, with a velveteen pelt and a wind-up music box that played Brahms’s Lullaby. Though Lambie’s good looks diminished with passing time, SWMBO’s love was steadfast. Even unto this day, Lambie occupies her own little niche in the Missus’s bedroom closet, a well-worn touchstone from the mists of childhood. 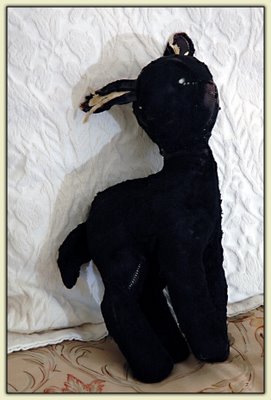 The parents of Elder Daughter’s boyfriend Khody live in the Maryland suburbs of Washington, and they have a cat named Pishlou.

Pishlou is an elderly Persian cat, seventeen years old, which corresponds to about 275 in human years.

When Elder Daughter and Khody sent me several photographs of Pishlou yesterday, I didn’t know whether to laugh or cry. The Pishster is by no means a cute kitty. She is, in fact, downright horrible-looking, to the point where I had been tempted to post the photos with the snarky tagline, “The Ugliest Fucking Cat On Earth.”

But then, She Who Must Be Obeyed reminded me, with the beautiful insight and sensitivity that is a hallmark of her Fair Gender, that Pishlou was still a beloved pet. It would be insensitive - and nekulturny to boot - to make fun of a cat that somebody loves. Especially when said “somebody” is our daughter’s boyfriend and his family.

Her take on Pishlou is that she is like nothing so much as the Velveteen Rabbit. The Velveteen Kitty, let us call her, though she does not have much hair left, and, like the eponymous Rabbit, she has but one functioning eye. Yet despite her hellish appearance, she is still a vital, functioning Animal Companion, and she is much loved. 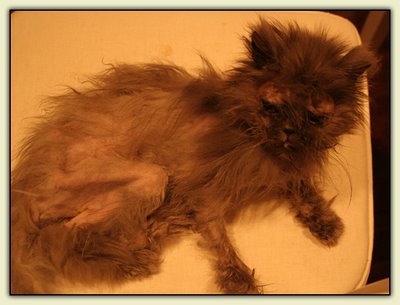 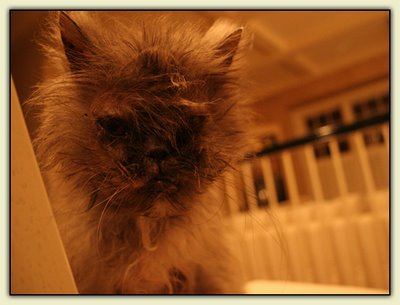 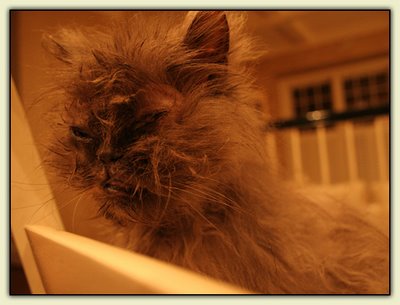 The Velveteen Rabbit, in time, became Real through the love of a boy. Pishlou, the Velveteen Kitty, always was Real...and she retains her vitality through the continuing love of her family. Long may she live.
Posted by Elisson at 3:39 PM