A VISIT WITH HELEN

Some time back, I recounted a story of five sisters.

Four of those sisters - young women at the time - emigrated from Europe. One ended up in Argentina; the other three came to the United States, where they started families and lived long, productive lives.

The fifth sister was not so fortunate. Unable to escape from Festung Europa as the Third Reich rose to power, she was swallowed up by the Holocaust, never to be heard from again.

Of the three sisters who made their homes in the United States, one eventually became SWMBO’s grandmother Ann. The others were her great-aunts Dorothy and Helen.

Today, only two of the original five sisters survive. Dorothy is a feisty 95-year-old. She still has all her marbles, so to speak, but in recent years she has become increasingly frail. It is only within the last six months that she reluctantly moved out of her house and into assisted living quarters.

Her younger sister Helen, who is anywhere from 86 to 92, depending on which piece of documentation you happen to be looking at, is not doing quite as well. Helen has been suffering from Alzheimer’s syndrome for the past few years, and her daughter Margie - an only child - moved her from her home in Kansas City to a facility in Maryland for elderly people with cognitive issues. It’s a half hour drive from Margie’s home, making it easy to visit frequently.

I had last seen Dorothy four years ago, at the Bar Mitzvah of her grandson Josh – the Missus’s second cousin. Back then, Dorothy was robust enough to manage the trip from Kansas City to Chicago all by herself - not too shabby for a 91-year-old lady. And it was not the easiest journey, given the air traffic delays endemic to O’Hare. This year, when Josh’s sister Leah celebrated her Bat Mitzvah, Dorothy was no longer able to travel. However, the Missus had spent a few days with her over the summer, flying out to Kansas City to help with the difficult task of packing up for the move to assisted living.

Helen was another story. Neither of us had seen Helen in the past eleven years - not since she came to Fort Worth back in 1995 to watch SWMBO’s kid brother Morris William get hitched. She and her sister Dorothy provided hours of amusement back then, bickering and needling each other.

[Years later, when Matata would chase Hakuna around the house, trying to bite her ass, there would be a familiar feeling to the proceedings. Perhaps I was flashing back to that last time I saw Helen and Dorothy together.]

This weekend we were in Columbia, Maryland to watch SWMBO’s other second cousins - Helen’s twin grandchildren Ryan and Rachel - step up to the Adulthood Plate. As long as we were there, it would have been a shame not to visit Helen...who knows how many more opportunities we’ll get? So it was that we found ourselves at Dementia Central, out in the wilds of Maryland.

It’s not an easy thing, visiting a resident of an Alzheimer’s Retreat. A faint pong of urine hung in the air: the spoor of the terminally aged. We passed a brightly lit common room in which an elderly gentleman was holding court, talking excitedly about some random topic. We passed pleasantly appointed bedrooms, all nicely made up...and yet with the unmistakable aura of loneliness, of the End-Game. It’s the anteroom outside the office of the Big Guy, and there is no denying it.

They wheeled Helen into one of the atrium areas where we could all fit: SWMBO and her mother, Elder Daughter, Helen’s daughter Margie, her sister Dorothy’s son John, and me. I will admit that I was not quite prepared for how much Helen had changed since I had last seen her eleven years before. She was thin, almost skeletal...and she looked old. Frail, as if a puff of air could make her disintegrate.

And yet, as soon as she opened her mouth, there was no mistaking that Five Sisters Personality.

She marveled at how good SWMBO and the Momma d’SWMBO looked. She griped about the accommodations: “I hate it here. But - what the hell...” And John pulled out his cellphone and called up his mother, so that Helen could talk with her sister for what was probably the first time in many months. At first she did not recognize the voice on the other end of the line...but you could see her eyes light up when she realized who it was. 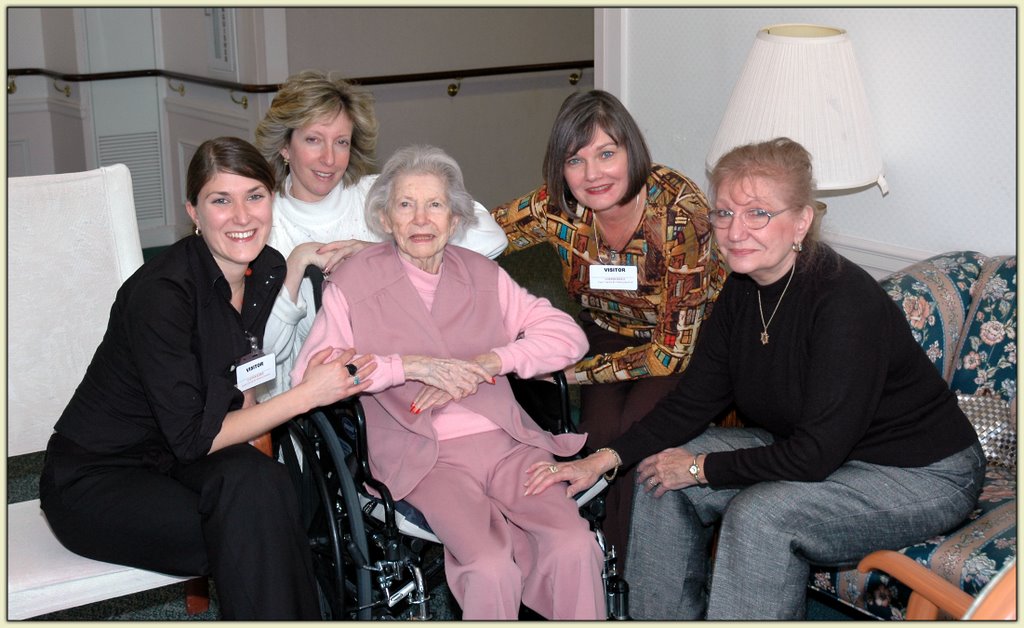 After spending some 45 minutes there, SWMBO, Elder Daughter, and I left while SWMBO’s mom and Margie continued their visit. I thought of Helen as a young woman - Margie’s house is festooned with photographs that show Helen as a vivacious young strawberry blonde, nattily attired, looking as though she could’ve stepped directly from the pages of Vogue. Somewhere, in the misty recesses of Helen’s mind, I’m sure that is how she still sees herself...

And I thought of my own mother, who would have turned 79 today. I had always held a vision in my head of my mother as a little old white-haired lady, a vision that, as things turned out, was never to be. Having passed away at the age of 60, she would never see her grandchildren grow up, never attend their Bat Mitzvahs, their weddings. Yet I had no regrets. Not for her, the lonely bedroom with the faint ammoniacal Nursing Home Odor, the long, slow slide into twilight.

Ah, time. It heals all wounds even as it wounds all heels...and there’s never enough to go around.