TELL IT TO THE JUDGE

It was the summer of 2004, and She Who Must Be Obeyed, the Mistress of Sarcasm, and I were returning from a week-long road trip to the Northeast. A few days to attend my 30th college reunion; a few days to visit with Eli (his ownself) and Mrs. Eli; a few days in Cambridge with Elder Daughter.

After a full day of driving from Boston, we had stopped for the night somewhere on the southern marches of Richmond. At the Butt-Crack of Dawn, we hightailed it out of there, headed south on I-95, intending to stop for breakfast after we had gotten a few miles under our belts. Sure enough, as inevitably as the sun rising in the East, the cabin of our sedan gradually filled with the lusty sounds of borborygmus.

SWMBO, our trusty driver, was easily persuaded to stop for breakfast. This we did at a Crapper Barrel near the Virginia-North Carolina border.

I’m sure many of my Esteemed Readers are familiar with the Crapper Barrel. Not only can you get your all-day breakfast, your meat ’n’ three, your countrified chicken ’n’ dumplin’s there - you can also load up on Old Time Radio CD’s (superannuated content meets modern technology!), old-fashioned regional sweetmeats, Christmas gewgaws ’n’ gimcracks, and jes’ plain ol’ Crappola. And you can drive yourself batshit playing that stupid-ass game with those fucking golf tees and the triangular piece of wood. Yeah, you know the one I’m talking about. The one where you keep playing until your food is cold and your brains have turned to pudding because you Just Can’t Fucking Figure Out How To Leave Fewer Than Eight Tees.

There we sat, waiting for our stacks of hotcakes and bowls of steaming hot grits to arrive. I was into my 37th round of the Stupid-Ass Tee Game; SWMBO and the Mistress were having a conversation; and I began to feel as though eyes were boring into the side of my head.

They were - and they belonged to Ol’ Banjo Eyes. Eddie Cantor!

For hanging there on the wall next to our table, placed there for purely decorative purposes, was an ancient Parker Brothers game board, with Eddie’s demented grin front and center. 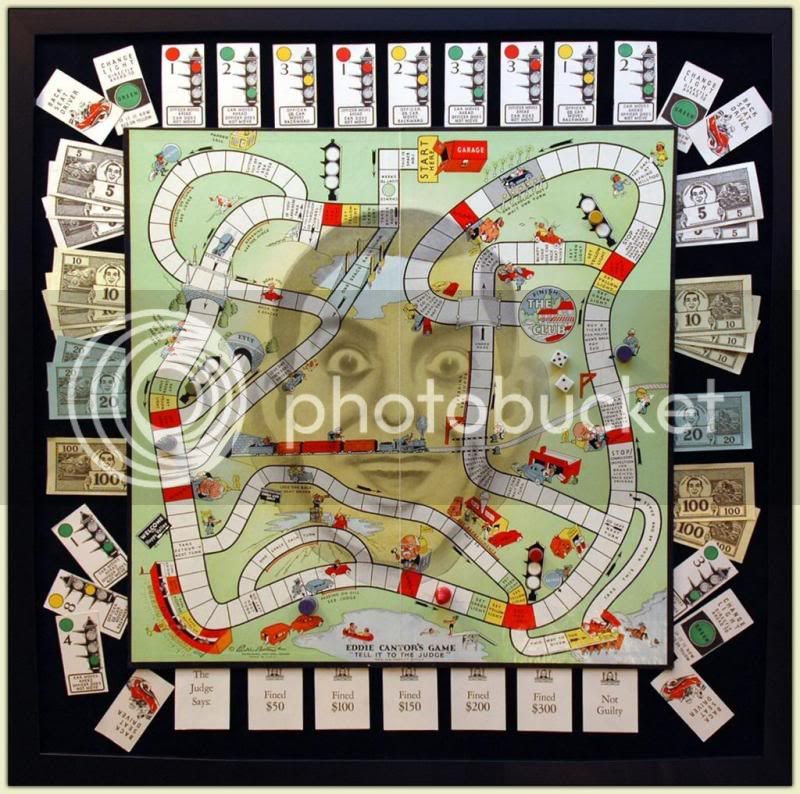 The game? Tell It To The Judge, a board game in which one would attempt to navigate one’s car from the garage to the Club without suffering humiliating breakdowns or being arrested for trivial moving violations.

Tell It To The Judge was around for years, but eventually it disappeared from the Gaming Tables of America. That jaunty 1930’s Art Deco design and jazz-age theme were not enough to save it.

As soon as I saw that board, I knew I had to find one of those games. When we arrived home that evening, I began scouring eBay. Within a few weeks, I had a near-mint condition game, complete with playing pieces, cards, and Play Money.

Let’s take a look at that money. It’s almost like Bizarro World Monopoly Money, with Eddie Cantor’s exophthalmic grin (so reminiscent of the grinning mascot of George C. Tilyou’s Steeplechase Park in Coney Island) shining forth from the center of each bill. 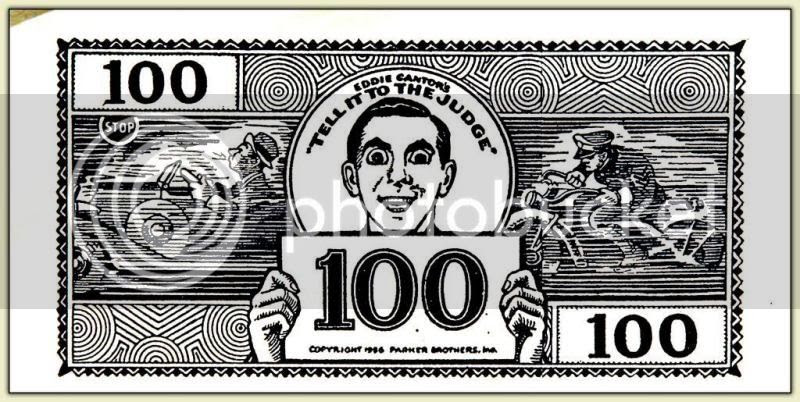 [Cross-posted at Leslie’s Omnibus. Tip o’ th’ Elisson fedora to Ivan, whose recent post at Thrilling Days of Yesteryear got me thinking about Mr. Cantor.]
Posted by Elisson at 11:26 PM