The Missus and I were on the way to our gate at Washington Reagan Airport this morning. We had had a busy morning, grabbing a cup of coffee with Elder Daughter and driving her to work up in Silver Spring; stopping at a downtown hotel to make arrangements for a family get-together several months from now; and picking up a gift for the Mistress of Sarcasm’s boyfriend. Rather than cool our heels in the airport for three hours, we elected to catch an earlier flight back to Atlanta, one that just might get us home before the worst of the rush hour struck.

We ducked into a newsstand for a moment, but I lost interest rapidly when I saw that every single Theobroma cacao-related product offered there was priced at roughly triple what it would cost back home. I likes me my chocolate, but I’m not a total cacao-crack whore. I could wait.

On exiting the newsstand, She Who Must Be Obeyed pointed out an elderly lady who was sitting in an airport wheelchair just outside the newsstand. “Isn’t that...?

It was. I spoke her name, questioningly; she smiled and said, “Yes,” whereupon I took her hand in mine.

“Hello, my name is Elisson. You don’t know me, but you met my father in Paris last year. Do you remember Eli...?”

She did. For, of course, I am blessed with an Unforgettable Daddy.

It was spring of last year when Mr. And Mrs. Elissonsdad were vacationing in Paris and its environs. Among their very small tour group was this selfsame elderly - yet sprightly - lady, who promptly took a shine to them and had dinner with them on at least one occasion (documented here). What were the chances that SWMBO and I would ever have encountered her?

The lady? None other than the legendary Kitty Carlisle Hart, who at the age of 96 can still do an entire cabaret show solo, standing in high heels, without the aid of glasses or contact lenses, and can still hit (most of) the high notes without so much as a glass of water. 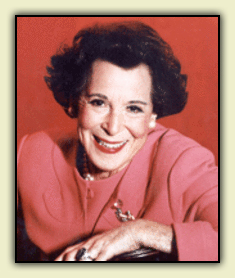 Miss Carlisle’s curriculum vitae - spanning the movies, opera, and television - is impressive enough, but the list of people she used to hang out with back in the day reads like a Who’s Who of the 20th century American arts and culture scene. George and Ira Gershwin. The Marx Brothers. Irving Berlin. Oscar Hammerstein. Frederick Loewe. Kurt Weill. Moss Hart, to whom she was married for fifteen years until his death in 1961. 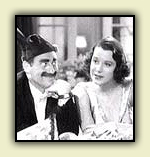 She had been in Washington to attend the 29th annual Kennedy Center Honors awards celebration and was on her way back to New York, her longtime home.

Not everyone makes it to their mid-nineties; certainly, not all of those who do still have all their shit in one sock. But Kitty Carlisle Hart most definitely is a Together Lady. Perhaps a bit more frail than she was in her prime, she is nonetheless still active, attractive, and charming.

All of us should be so fortunate.
Posted by Elisson at 5:51 PM