This weekend the Clan d’Elisson celebrated not one, but two – count ’em, two – major Life-Cycle Events.

We converged in Savannah, AKA The Beautiful Lady with the Dirty Face, to watch as the Mistress of Sarcasm was graduated from the Savannah College of Art and Design with her Bachelor of Fine Arts degree. The graduation ceremonies were split into two chunks: the first, in which the degrees were formally conferred and all the speeches made, and the second, in which the various schools handed out diplomas to the individual students. In Chunk One, the keynote speaker and honorary degree recipient was Joel Siegel, he of Morning Television fame, whose speech had just the right balance of seriousness (very little) and warm humor (plenty). And in Chunk Two, we found out that the Mistress received her degree Magna Cum Laude. Way to go, kiddo! 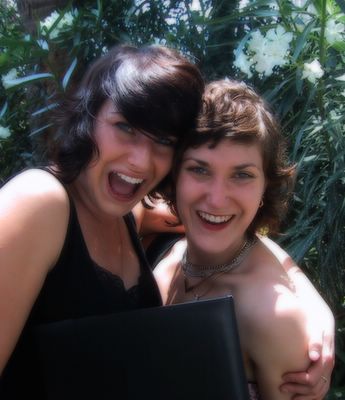 The newly-degreed Mistress (L) with her big sister.

But we had another Major Occasion to celebrate as well. On the very same day that the Mistress received her degree, the Dad d’Elisson – Eli his ownself – marked the completion of eighty Voyages Around the Sun. 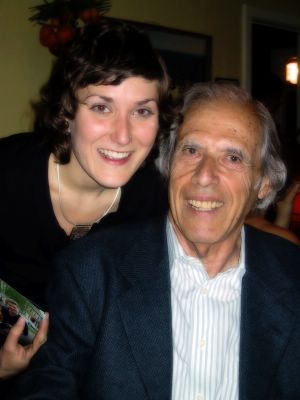 Elder Daughter and the Daddy d'Elisson.

Eli his ownself is a vigorous, physically active (newly-minted) octogenarian. He plays racquetball three times a week, grinding many a younger player into the dust with his wily moves and deadly killshots. He, along with his Lovely Missus, travels the world. Their last peregrination, in early May, took them to Paris, where they spent a week getting acquainted with the city in the context of a small, intimate tour group.

One of their tour companions was the legendary Kitty Carlisle Hart, widow of even-more-legendary playwright, director, and producer Moss Hart (do the names My Fair Lady and Camelot strike a familiar note?). Miss Carlisle played herself in Six Degrees of Separation, Radio Days, and others too numerous to count – you may also remember her from the Marx Brothers movie A Night at the Opera, in which she was the young female lead. She also appeared on every version of the quiz show To Tell The Truth, from 1956 to 2002. 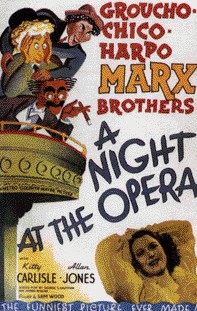 Kitty Carlisle in her younger days.

Dad made an impression on the 94-year-old Miss Carlisle right from the start. When they were introduced, he took her hand and kissed it, ever the gentleman. But, smiling, she corrected him, saying that when a gentleman kisses a lady’s hand, he interposes his thumb so that while it appears that he is kissing her hand, he is really discreetly kissing his thumb. To this, Eli his ownself responded, “But if I were to do that, then I would be unable to suck the precious stones out of your rings.”

This, Esteemed Readers, is where I get my twisted sense of humor.

Life is a fragile, ephemeral thing, and there are no guarantees. Five years ago, when Dad had a heart attack on the racquetball court (where else?), it was only the fast thinking of his friends and the rapid availability of the Jumper Cables o’ Life that kept him on the planet with us. There was no assurance that he’d see 75, much less 80.

But here he is, watching his granddaughter receive her college degree.

And here I am, surrounded by family. Counting my manifold blessings, and running out of numbers.
Posted by Elisson at 2:16 PM