NOPE, THERE’S NO “PHIL E. BUSTER” AT THIS ADDRESS 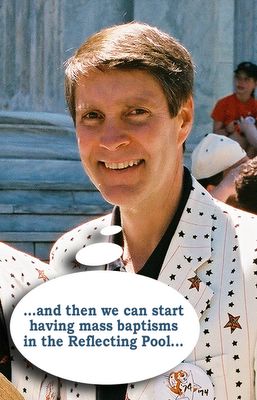 Senator Bill Frist ponders the Nuclear Option after his meeting with Christian conservatives, in which he agreed to join a telecast portraying Democrats as “against people of faith” for their efforts to block President Bush’s judicial nominees.

...has distanced himself from the statements of others like the House majority leader, Tom DeLay, who have attacked the courts, saying they are too liberal, “run amok” or are hostile to Christianity.

The telecast, however, will put Dr. Frist in a very different context.

Well, everybody’s got his or her own vision for the future of America. Why shouldn’t Senator Frist have his?
Posted by Elisson at 8:17 AM