It is a rare treat to have both Elder Daughter and the Mistress of Sarcasm together with us at Chez Elisson these days. The Mistress arrived from Savannah Thursday afternoon, and Friday night we picked Elder Daughter up at Hartsfield-Jackson Atlanta International Airport (just typing that ridiculous long name out makes my fingers tired). 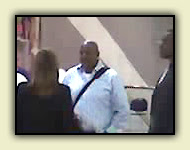 The airport was bustling, what with spring break, the Final Four, and the Atlanta Braves season opener all coinciding, landing on our fair city all at once like a Perfect Storm o’ Travel Incentives. We arrived just in time to see Best Actor Academy Award winner Forest Whitaker, no doubt here to catch some of the Roundball Action.

Upon arriving home, we threw together some miscellaneous foodstuffs and enjoyed each other’s company. A sample exchange, paraphrased as necessary due to my faulty memory:

Elder Daughter (discussing a proposed YouTube video and reacting to my recommending an alternative to the ignition of flatus): That might work. It’s less dangerous [than lighting your farts]; you’d be less likely to set the hair in your ass on fire.

SWMBO: I don’t have any hair in my ass.

Elder Daughter: Yes, you do.

Elder Daughter: Yes, you do. Are you a mammal?

Elder Daughter: Then you have hair in your ass. [Puts entire cracker in mouth at once.]

SWMBO: Did you just eat that entire cracker in one bite?

Indeed. E.D. is most definitely a Chip off the Old Block. It’s downright scary at times.

Saturday afternoon, we knocked around Lenox Mall for a while, after which we enjoyed a fine dinner with friends...a sort of Advance Birthday Celebration for Elder Daughter...during which I was pleased to get a call from this guy, who, along with his patient and forbearing Missus, was dealing with a small army of Unruly Blodgers.

As I write this, the Mistress of Sarcasm is driving back to Savannah, that Beautiful Lady with the Dirty Face. (Savannah, not the Mistress.) Duty calls, and all that. But Elder Daughter is still here, and I needs must be content with having only one of my babies home for the first Seder.

Ah, yes. I’m a happy man when my babies are back in the nest, for however brief a time...