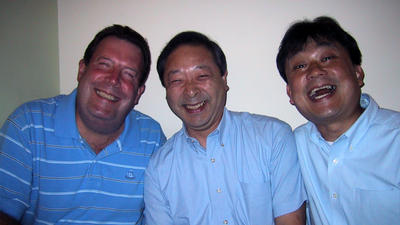 Tuesday evening, She Who Must Be Obeyed and I enjoyed a most excellent Japanese dinner. Aside from the exceptional food, what made the evening special was that it was with my old friend Walter, whom I had not seen in 29 years.

Walter and I first met in first grade, back in 1958. We were classmates off and on through elementary school, but became good friends in high school. It was an Odd Couple kind of relationship, the Brain and the Athlete. Walter was a track star, a pole vaulter, and a German Lutheran, whereas I was the Jewish Academic Type. Despite our outward differences, we shared a demented sense of humor, including a mutual admiration of Jean Shepherd’s writing and radio work. 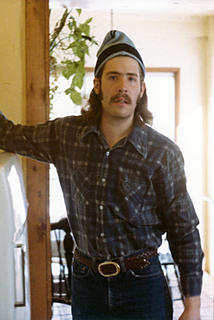 We saw less of each other when we went off to college, but summer and winter vacations were opportunities to get together and hang out in our favorite dive in Oyster Bay. Upon graduation, however, I ended up in Texas and Walter gravitated to Vermont, and we drifted apart. The last time I saw him, it was a chance encounter in December 1976 at the Magic Mountain ski resort in the Green Mountain State, where SWMBO and I spent a day skiing. (More properly, I spent the day skiing and SWMBO spent the day drinking hot chocolate in the ski lodge.) Walter was working there, and we had a pleasant, albeit brief, encounter. It was to be the last time we would see each other...until two days ago.

Last month, in an idle moment, Walter – now resident in the wilds of Southern New Jersey - had tracked me down, thanks to my substantial Internet footprint and the good offices of Google. An exchange of e-mails followed, then a lengthy telephone conversation – and we resolved to get together. This was made easier by the fortunate – and fortuitous – fact that his business has him traveling frequently to My Neck Of The Woods.

And so it was that I got the call informing me that my old buddy was going to be in town this week – could SWMBO and I join him and two of his Japanese colleagues for a sushi dinner? Why, of course!

I picked up Walt and his entourage – a couple of guys from Wakayama who call themselves “Chris” and “Carl” – at their hotel and we joined SWMBO at Sushi-Huku on the north side of Atlanta. It’s a little place set in what looks like an old fire station, a stone’s throw from the local offices of the Great Corporate Salt Mine, and the Missus and I have eaten there many times over the years – it’s probably the best sushi restaurant we’ve been to in this town.

Walt, ever solicitous, was concerned about the choice of cuisine for the evening. Would SWMBO eat sushi? he wanted to know. I assured him that, after I had committed the financially disastrous mistake of introducing her to Japanese food years ago, it was not a problem. Financially disastrous, sure: for a while there, when we lived in Houston, the Missus, Elder Daughter, and the Mistress of Sarcasm threatened to bankrupt me with their Prodigious Sushi Appetites.

We sat down at our table, and it was then that it became evident that Carl and Chris had not expected SWMBO and me to be familiar with the evening’s offerings. But as we began ordering – first appetizers, then Miscellaneous Sushi Stuff, their eyes grew wide with surprise. For Elisson knows his Nihon-Ryori, having spent some little time in the Land of the Rising Sun and all.

I’m not sure whether it was my (limited) ability to read Japanese, or to bandy a few words about, or the fact that I ordered goma-ae (spinach with sesame sauce) as an appetizer, but it got to where every time I ordered something, Chris and Carl would look at each other and then pronounce, “Very professional!” Ikura, salmon skin temaki, unagi, saba, hamachi – all the good stuff, all Very Professional. Hot sake? Very professional. Kirin Ichiban biru? Very professional. The owner, Hukuda-san himself, remembering me? Extremely professional. 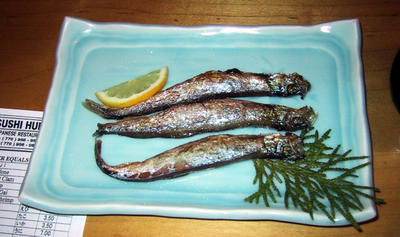 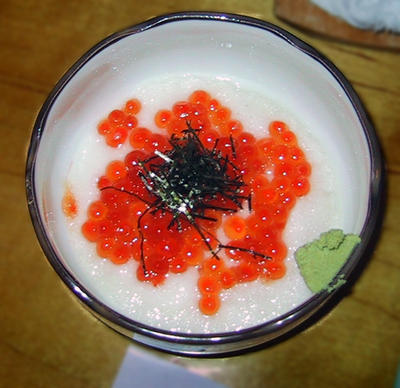 We stuffed ourselves very professionally and had a grand old time, alternating Degenerate Reminiscences with mouthfuls of fish. Superb.

Walt and I are different from what we were in high school and college – it’s been a lot of water under the bridge since then. I have a lot less hair; Walter has a bit more...Walter. Even our voices are different, carrying the patina of thirty years. But as I looked at him, I could see the same devilish grin, the same personality, the same adventuresome spirit.

It was good to see my old friend again.

It was...very professional.
Posted by Elisson at 4:02 PM