A lovely little term I picked up from Mamacita over at Scheiss Weekly.

It refers to the little garden area at the apex of a piece of property - and it turns out our Little Slice o’ Jawja Real Estate is shaped just right to have a Crotch Garden. See the photo below...which looks remarkably like the hand-drawn map in Mamacita’s post. 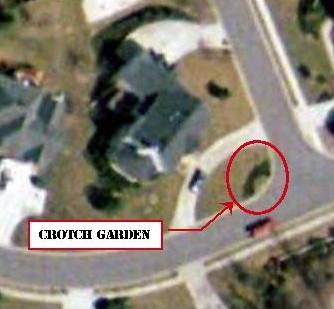 I have no idea whether “Crotch Garden” is general coin, or just something Mamacita cooked up: either way, it deserves to be publicized. Maybe it needs to be entered into the Pseudodictionary - but I'll leave that to Mamacita. Regardless, it joins that wonderful list of Words I’ve Learned From Blogging: craptastic, Dutch oven, covered wagon (which is the same as a Dutch oven), frint, burgoolie. [Well, actually, the last two are mine. Try Googling “burgoolie” and see what you get.]

What should one plant in a Crotch Garden? Why, bushes, of course.
Posted by Elisson at 7:35 AM