I AM CURIOUS: GEORGE

No, it’s not the title of a groundbreaking 1960’s Swedish soft-porn flick.

Last week when She Who Must Be Obeyed and I were in Boston visiting Elder Daughter, we were, the three of us, lounging around in our Copley Square hotel room when a little squib in the paper caught the eye of The Missus. There was to be a Birthday Party for Curious George at the Boston Public Library, complete with a humongous Birthday Cake made by the Food Network’s Ming Tsai. A fine coincidence, given the September 26 release of The Journey That Saved Curious George: The True Wartime Escape of Margret and H.A. Rey, Allan Drummond’s book about the flight of Curious George’s creators from Nazi Germany.

Despite none of us being especially serious fans of C.G., how could we resist? The Boston Public Libe was visible from our hotel room window, a scant two or three blocks away. And there was to be Cake! Cake baked by Ming Tsai his ownself! Perhaps it would be an Asian Fusion Cake, with chocolate and tofu! (Feh.) We had to check it out. 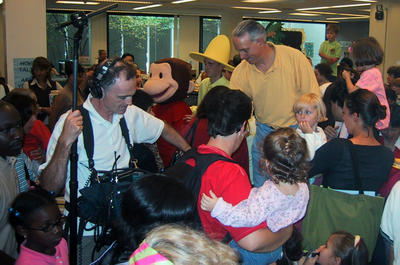 Check it out we did. The Children’s Section of the library was awash with a teeming flood of Rug-Rats and Floor-Monkeys, creating in SWMBO and me a sort of semi-nostalgic Relief That We Don’t Have To Put Up With This Shit Any More. There was a Man in the requisite Yellow Hat, and a sweaty individual in a Curious George suit. Not quite as elegant as a Malibu Monkeysuit, I’ve gotta say. 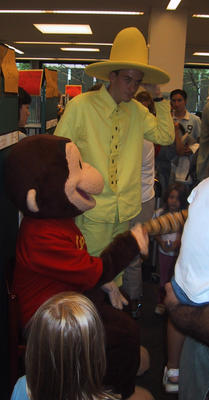 We decided that, although the cake looked good, that it would be both Piggish and a Waste of Valuable Time to join the enormous queue of harried parents awaiting a slice. And so we bade farewell to Curious George...and a lovely librarian with an icing-bedecked upper lip. 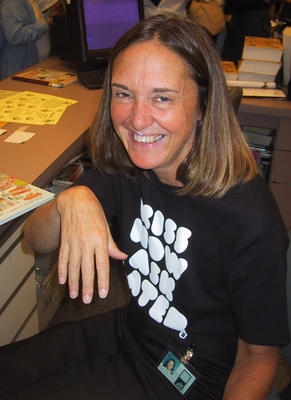