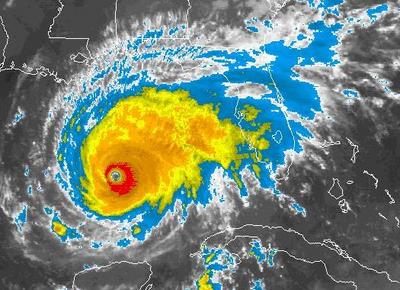 Blow, winds, and crack your cheeks! rage! blow!
You cataracts and hurricanoes, spout
Till you have drenched our steeples, drowned the cocks!
You sulphurous and thought-executing fires,
Vaunt-couriers to oak-cleaving thunderbolts,
Singe my white head! And thou, all-shaking thunder,
Strike flat the thick rotundity o’ the world!
Crack nature’s moulds, all germens spill at once
That make ingrateful man!

Hurricane Rita is churning its way toward the Texas Gulf Coast, and it promises to be a Royal Fucking Mess.

This is one of those times I’m glad She Who Must Be Obeyed and I no longer live in Houston. All the years we spent there in the late 1970’s and through the 1990’s, we had our hearts in our collective mouths, anxiously awaiting the arrival of The Big One. 100-year flood maps don’t mean a whole hell of a lot in a city like Houston, and there were a couple of occasions when rising waters got within mere feet of our front door despite the fact that we never lived in a so-called flood plain. Talk about an “Oh Shit” moment.

SWMBO’s family members are all up north in Fort Worth and Denton, but a look at the NOAA maps says that they’re not entirely out of the woods. There is going to be a Huge-Ass Swath o’ Misery all the way up to Okla-freaking-Homa from Miss Rita.

The denizens of the Great Corporate Salt Mine are all fleeing like rats from a sinking ship. Prudent.

The area’s refineries and chemical plants - some of which are still dealing with the aftereffects of Hurricane Katrina - are battening down the hatches. These facilities are designed to withstand Serious Weather, and hopefully they won’t be pushed beyond their design limits. If they are, get ready for Very Expensive gasoline, folks.

There have been a (surprisingly) few big storms to hit the Houston area in the last decades. Hurricane Alicia in 1983 was a “mere” Category 3 storm, but it killed 21 people and caused massive flooding and damage. More flooding resulted from Tropical Storm Allison in June of 2001, with 22 deaths and water filling the basements of many buildings downtown and in the Medical Center. I narrowly escaped that second one, having been in Baton Rouge the day before.

But the benchmark Houston-area storm, one that I remember from my childhood, was Hurricane Carla, in 1961. With 150 MPH sustained winds, 175 MPH gusts, and a 22-foot storm surge, Carla thundered ashore near Matagorda Bay on September 11, a huge Category 4 monster. As a not-quite-nine-year-old snotnose, the thing that horrified me the most (from my comfy New York vantage point) was the image of roof-deep floodwaters, filled with debris and venomous snakes. As Indiana Jones would say, “Snakes. Why does it always have to be snakes?”

In Texas, 34 people lost their lives to that storm. But that was then, and this is now - and “now” is scarier.

What’s different today, compared with 1961, is that millions of people live in the Houston-Clear Lake City-Galveston metroplex that were not there 44 years ago. The other difference is the degree of land subsidence that has taken place since then, a function of the huge amount of development in the area. The region is therefore far more vulnerable, both geographically and demographically.

The good news is, Texas seems to have matters well in hand, preparedness-wise. A million people have evacuated, and the image of school buses filled with hospital and nursing home residents being hauled away is a welcome contrast to those infamous photos of drowned buses in New Orleans.

Galvestonians know to Get The Hell Out. The hurricane of 1900 killed between 6,000 and 10,000 people there, and that island sits precious few feet above sea level. Nobody with a functioning brain will be thinking of “riding it out” in Galveston.

I’ve said it before, and I’ll say it again. Hurricanes are a natural phenomenon, and Rita is no exception. The Big Guy is not sending this storm to Punish the Sinners, even those who participate in Pagan Rituals such as the Oogah-Boogah Dance. But He will be watching to see how we deal with the aftermath - for that is the real measure of our humanity.

May He protect those who live in the path of this storm, and see them safe.