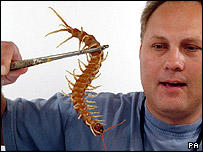 Aaron Balick thought it was a a mouse that was rustling under some papers in his North London home. But instead, according to this account, he found something else:

“The sound was coming from under some papers which I lifted, expecting to see the mouse scamper away,” he said.

“Instead, I saw this prehistoric-looking animal skitter away behind a stack of books.

“I was shocked. I thought, ‘there’s no way this thing is in my house, this is not for real’.”

If I had found something like that running around in my house, I would have shit myself, right on the spot, hard enough to propel me into low Earth orbit. Upon returning to terra firma, I would have had to burn my house to the ground, salt the ashes, and move to the Other Side of the Fucking Continent.

It gets worse. The centipede, a Scolopendra Gigantea measuring nine inches from stem to stern, was a modest-sized example of the breed. They can reportedly grow to eighteen inches.

And wait - there’s more! Damn thing is venomous. Yes, it can inflict a painful sting for which there is no known antidote. Fortunately, the sting is rarely fatal. I suspect that’s because just seeing one of these evil-looking motherfuckers is enough to stop your heart. The sting? Why, that is gilding the lily.

At first, the centipede was thought to have come to London in a cargo of imported fruit or electronics parts. You know, like in that old Banana Boat Song, AKA Day-O: “A beautiful bunch of ripe banana / Hide the deadly black tarantula / Holy shit, dat ain’t no tarantula / What de fuck is dat t’ing?”

OK, I made that last part up.

But it appears that a neighbor with a penchant for keeping Exotic Pets has come forth, claiming to be the owner of the monster ’pede. And a local pet shop acknowledges that the creature had been purchased there.

Message to neighbor with penchant for keeping Exotic Pets: Stay the fuck away from my neighborhood. Far, far away.
Posted by Elisson at 8:56 PM