CARNIVAL OF THE CATS #77

Welcome to the 77th Carnival of the Cats!

This week’s Carnival is brought to you by Hakuna and Matata, the Resident Kitties at Chez Elisson.

Hakuna: We thought long and hard about an appropriate theme for today’s Carnival, given that it is September 11, the fourth anniversary of the horrific terrorist attacks on New York and Washington, D.C. But cats have nought to do with the evil that you stupid humans inflict upon one another, so Elisson tells us that he will save his Memorial Thoughts for another post.

Matata: The love of you Bifurcated Gods for your animal companions, in many ways, sets you apart from the rest of the animal world. The comfort our fellow creatures offer you is, in so many ways, the perfect antidote to the angst and hatred with which you poor humans must deal on a daily basis. So let these beautiful cats offer you a haven from the cares of the day-to-day world, if only for a few minutes.

And now, on with the cats!

First up is Sgt. B., our man on The Gun Line, who kicks off this edition of the Carnival with Woobies..., in which he propounds the idea that cats are “the manifestation, in this dimension, of a far older, wiser, and highly intelligent creature...” Well, I don’t know about that, but I will say that SWMBO’s kid brother Morris William had a cat named Woobie that lived to be 21 years old. Would’ve lived longer, too, but when she turned 21, he took her out to a Titty-Bar to celebrate her coming of age, whereupon she had a bad reaction to the fifth of Jack Daniel’s they shared.

Mélange offers us a beautiful (if a tad clumsy) Siamese, Chloe. Hakuna approves. Meanwhile, Chloe’s companion Scarlett shows us how to stay cool.

Julie, of i-pets.com, puts up a post about Smoke and Bandit as they do a little Locust Hunting. Fine sport, that. 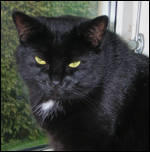 Mathilde, of Skør i Skralden, shows us a gorgeous black kittie who is almost, but not quite, making eye contact. Probably harboring Evil Thoughts about the veterinarian. Give that cat a shot of akvavit, pronto!

At No Deep Thoughts, PJ has Rhett in a variety of Sleepy Postures. Just looking at ’em makes me want to curl up and take a nap...relaxing!

Noah, resident kitty at Manx Mnews, tells us how to help those victims of Hurricane Katrina who cannot speak for themselves. A big Manx Thanx to Noah (and Debra!) for this timely post.

The cats at Texas Oasis know just how to make the most effective use of a Cat Bed. Check this post out to see how it’s done.

Michael Turner of Curiouser & Curiouser gives us a picture of Harley, parked on the Porcelain Throne awaiting Michael’s emergence from the shower. And then there’s this picture of Gizmo, the new arrival at his brother-in-law’s household. Insufferably cute!

Lab Kat reaches back into the Archives for a picture of a youthful Pica.

Jazz, of Running Scared, contributes this picture of Colin, napping whilst rolled up in a rug. Looks kinda like a giant Kitty-Spliff. 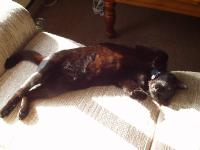 Smacky shows off his snazzy new collar, as well as his great Stretching Skills, at Lunar Obverse.

According to Maggie Katzen (now there’s a great catbloggin’ name!), Flat Rugs Do Not Good Pillows Make. Ahhh, I dunno. That cat looks plenty comfortable to me.

At Middle-Fork, the Robot Vegetable has a tale to tell of Tinker, and the Veg lets Tinker’s tail tell it. Be sure to check out some of the other fine photographs on this site.

Dolphins are not the only critters who play Where The Dolphins Play. Dem cats play there, too.

Miss O’Hara digs into the archives to show us Remington as a ball of fluff. I hate to overuse the word “cute,” but sometimes it’s the only descriptor that will do.

Just try to beat Ferdy (that most Conservative Cat) in a staring contest. Dare ya. That glare’ll fry a liberal at twenty paces.

Claude looks like the cat that ate the canary in this post at pages turned. Handsome, that!

“Canary? Nothing doing,” says Atticus at Josh’s Weblog. I understand. He probably prefers Finch to Canary.

Gullyborg, at Resistance is futile!, has Memphis invoking the spirit of Percy Bysshe Shelley. Ah, Shelley:

Percy Bysshe
Would take a pysshe
In Lake Geneva’s water.
Then, without fail,
Begin to nail
Good Mr. Godwin’s daughter.

[Look upon my poem, Ye Esteemed Reader, and despair!] 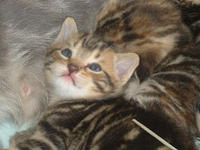 At The Common Room, The Head Girl shows us a photograph of a Tiny Kitty that was taken by First Year Girl, who is all of nine years old (!) The young lady definitely shows promise as a Cat Photographer.

You’ve all heard of seeing-eye dogs, but Alicia, the Grand Panjandrum over at The Venus and Mercury Cat Blog, tells us the story of Mercury, the Seeing-Eye Cat.

Warning: Do not visit eatstuff if you have a propensity for developing the Chocolate Jones. I mean, clare eats has a lotta stuff posted here that has nought to do with kitties, and it is Not for the Faint of Heart. On the other hand, you should at least check out Kiri, who knows how to break in a bedspread. eatstuff apparently also runs a weekly catpost roundup, so please welcome this worthy companion to the Friday Ark and Carnival of the Cats. 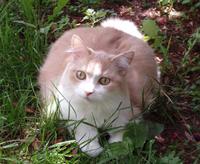 Aydin Örstan, at Snail’s Tales, sends us this lovely Birthday Photo of Artemis (“Temi”), who is a graceful Kitty Senior Citizen. She still has a kitten’s sparkle in those eyes, sez I.

Kat, at The Wisdom of Change, submits for our approval a series of pictures of two brand-new kitties: one a tortie, the other a ginger-and-white tabby, both Exceedingly Cute in the way only kitties can be. Good luck with your furniture, Kat.

“A Birdbath is not a Catbath.”
“It is, if I take a bath in it,” quoth Pumpkin over at fader77. Never mind that there’s no water in it. Cats generally avoid water...and birds generally avoid cats.

The lovely and talented Sissy Willis, of sisu, posts on the impact of Hurricane Katrina on cats and other Animal Companions. Sissy is a superb photographer, not only of her cats, but of Things In General; I encourage you to look over her fine site.

I think I gots da hots for Mensa Barbie. Is that really a picture of Menessa barbay her ownself, or a cleverly-created Photoshop? No matter. Go and visit Mensa Barbie Welcomes You and feast your eyes on a made-over Butterscotch. Afterwards, you may need a belt of real Scotch.

The beauteous Maddie gets herself entangled in the dreaded Venus Cat-Trap in this post at StrangeRanger.

Sharon, who writes over at Adventures of a Domestic Engineer, did not send me this link, but I happened to catch it as I was zooping through my Bloglines feeds. I couldn’t resist. Cute little bugger, innit?

Pretty much anyone who is reading this post is familiar with Piper, one of Laurence Simon’s Trio of Troublemakers. Lair sends in this pic of Piper pickin’ paws. Prrrrr!

Gir, of Your Moosey Fate, sends us this pair of Canajan Kitty Cats, showing off for the new camera.

Tommy (another Canajan, eh?) shows us how a cat can make itself Practically Invisible at Striving For Average. It’s the same technique used by the fabled Ostrich-Bird: if I don’t look at you, then perhaps you can’t see me...

Nikita, resident kitty at Sneakeasy’s Joint, makes a plea for the Humane Society of the United States, one of the key organizations working to rescue abandoned animals in the wake of Hurricane Katrina.

Mira, of The Oubliette, tells us the story of how Maleficent came to be rescued from a shelter, eventually ending up as the photogenic Animal Companion of Mira’s brother-in-law Luke. Lest we forget Noah, there’s also a picture of him sleeping off a Bumptious Evening.

It wouldn’t be a Carnival without Mog’s kitties. Here they are, parked on the sofa (look closely - there are three cats there!), and here’s Mr. Innocent-Pants, looking...well, innocent. Heh.

BJ, at Quite Early One Morning, presents a fine picture of Pi monkeying around on a Foo Lion. I am impressed that a lion may be familiar with the work of the late, great Bill Holman - perhaps Pi is similarly impressed.

My dear friend Rahel Jaskow, of Elms in the Yard, introduces us to Mitzi, a kitten who lives at the railway station. What may appear to be a dustpan has been pressed into service as a Kitty-Bed.

Rahel is a great fan of Hakuna and Matata, and she will be pleased to know that Hakuna weathered her trip to the vet yesterday with no problems at all. (Catching her and getting her to go was the hard part, of course.) The kitties are great fans of hers as well; they love listening to her ethereally beautiful voice, and you can too.

Panda, BicycleGirl’s cat over at TrailGrams, appears to be a basket case.

SB, the resident genius at Watermark (and host of next week’s Carnival!) proposes a novel way to help the animals post-Katrina, with Critters for Critters.

What would life be without Music and Cats? I’m not sure I ever want to know, especially if it means doing without Lyra, Sasha, and Sergei - and the lovely Kimberly, whose site would be worth visiting if only for the header photographs. Here, Lyra (with a little help from Sergei) investigates the World o’ Literature.

Let’s check in with Hakuna and Matata, shall we?

This loveseat did not appear to have enough Cat Hair on it. Problem solved.

Matata: Thanks once again for visiting, Esteemed Readers!

Hakuna: Be sure to visit next week’s Carnival, to be hosted by Watermark. SB’s a poet, and don’t we all know it!