If fish is Brain Food, as the popular bromide has it, then the Japanese are a nation of Einsteins.

It only makes sense for an island nation to feed itself with the bounty of the surrounding seas. Fish is the preeminent protein source in Japan, with various kinds of land animal protein following far behind: whatever taste the Japanese have for meat is mainly the result of decadent Western influence.

When Westerners think of fishy Japanese food, we tend to think of sushi and sashimi. (Mostly) raw fish, served over vinegared rice or au naturel. The archetypical Japanese food, it has surpassed hibachi steak in popularity here in the States to the point where it’s now available in supermarkets across the land.

Don’t ever be fooled into thinking that supermarket sushi tastes like real sushi. It is, at best, a way to satisfy your Sushi Jones in much the same way that a Mickey D burger will satisfy your Beefy Jones for a dry-aged prime porterhouse. By comparison, Subway Sushi - the kind of stuff that shows up in the o-bento boxes you can buy at any Japanese train station, or on a shelf in the corner 7-Eleven - beats most American restaurant sushi like a red-headed stepchild.

But as regards fish-based dining in Japan, sushi and sashimi are just the tip of the iceberg. Fish is as essential to Japanese cuisine as, say, corn is to American factory food. Which is to say that it’s pretty much everywhere.

Speaking of corn, where but Japan would you see a street vendor selling (of all things!) roasted corn on the cob...and grilled squid? Now, there’s a natural pairing for you. 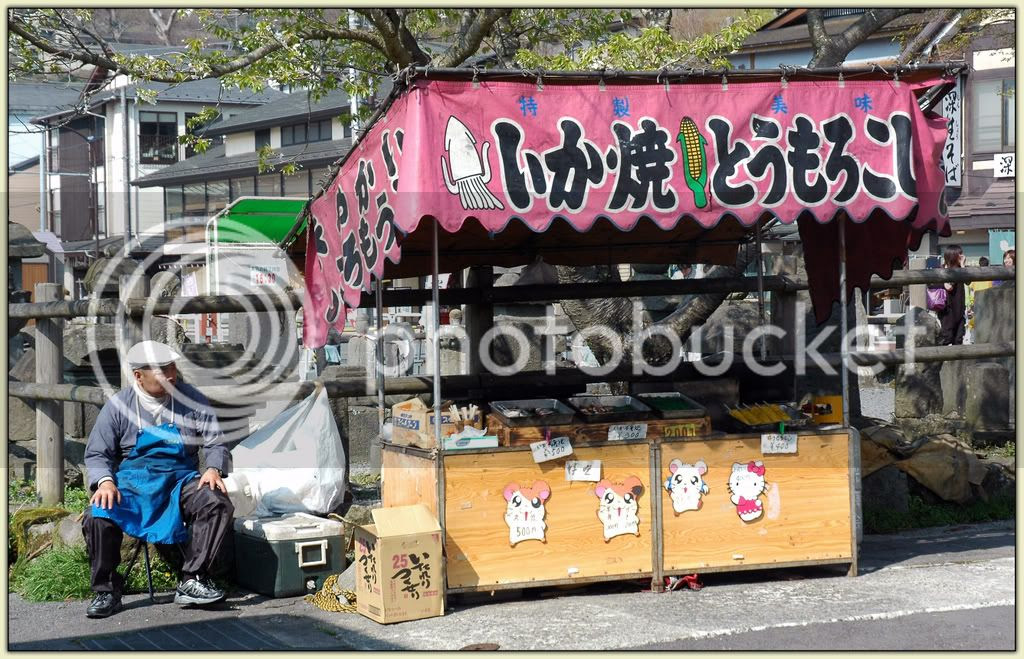 Corn on the Cob. And squid. Yum! 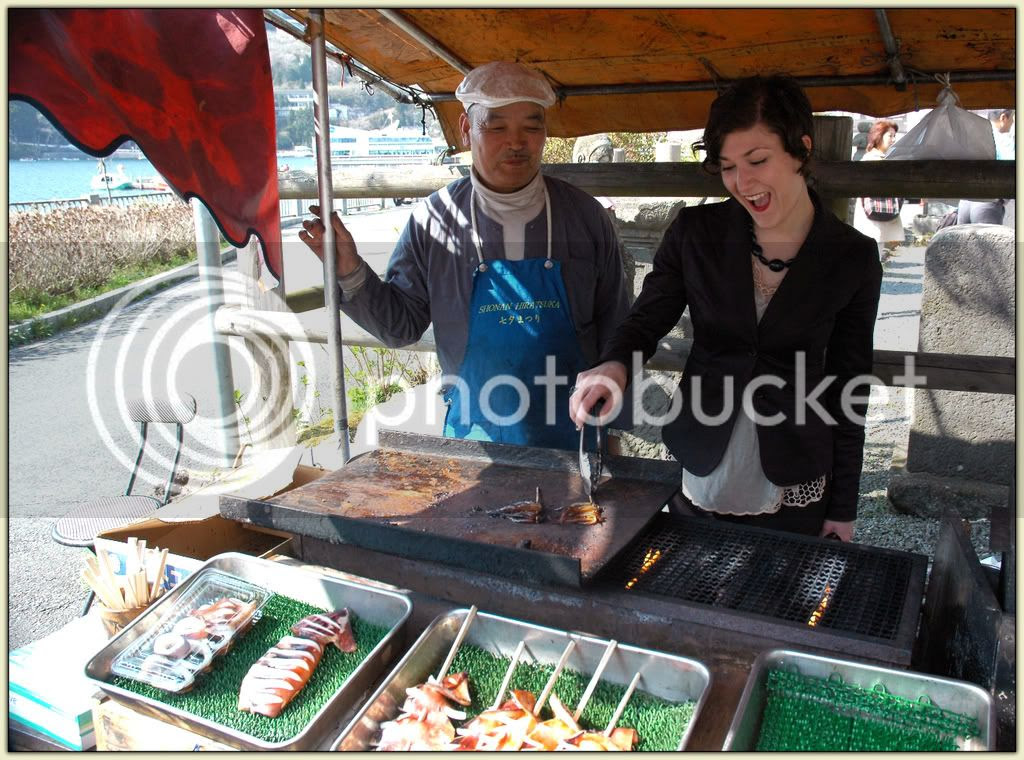 Our second morning in Tokyo, Elder Daughter and I got up before the Butt-Crack of Dawn™ and took a 20-minute walk down to the Tsukiji Fish Market. This is the clearing house for all the fishy victuals that feed the burgeoning hordes of Tokyo and its environs...so you can imagine just how huge it is.

A tiny corner of the Tsukiji Fish Market.

Every morning, there are two Tuna Auctions - fresh, then frozen. (As it is written: “Many are cold, but few are frozen.”) Visitors are able to observe the latter from a roped-off walkway, from which row after row of enormous, gelid fish carcasses can be seen. 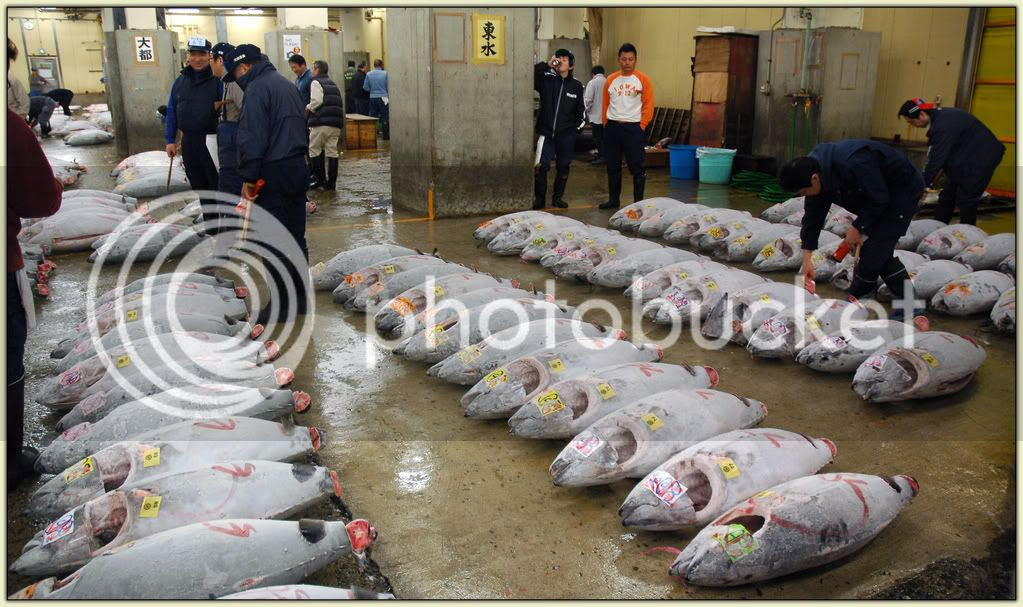 Not especially exciting, you think, until you realize that each of those fish has a street value of several thousand dollars. Did I say that the Japanese love their fish?

If it swims and people eat it, you’ll find it at Tsukiji. 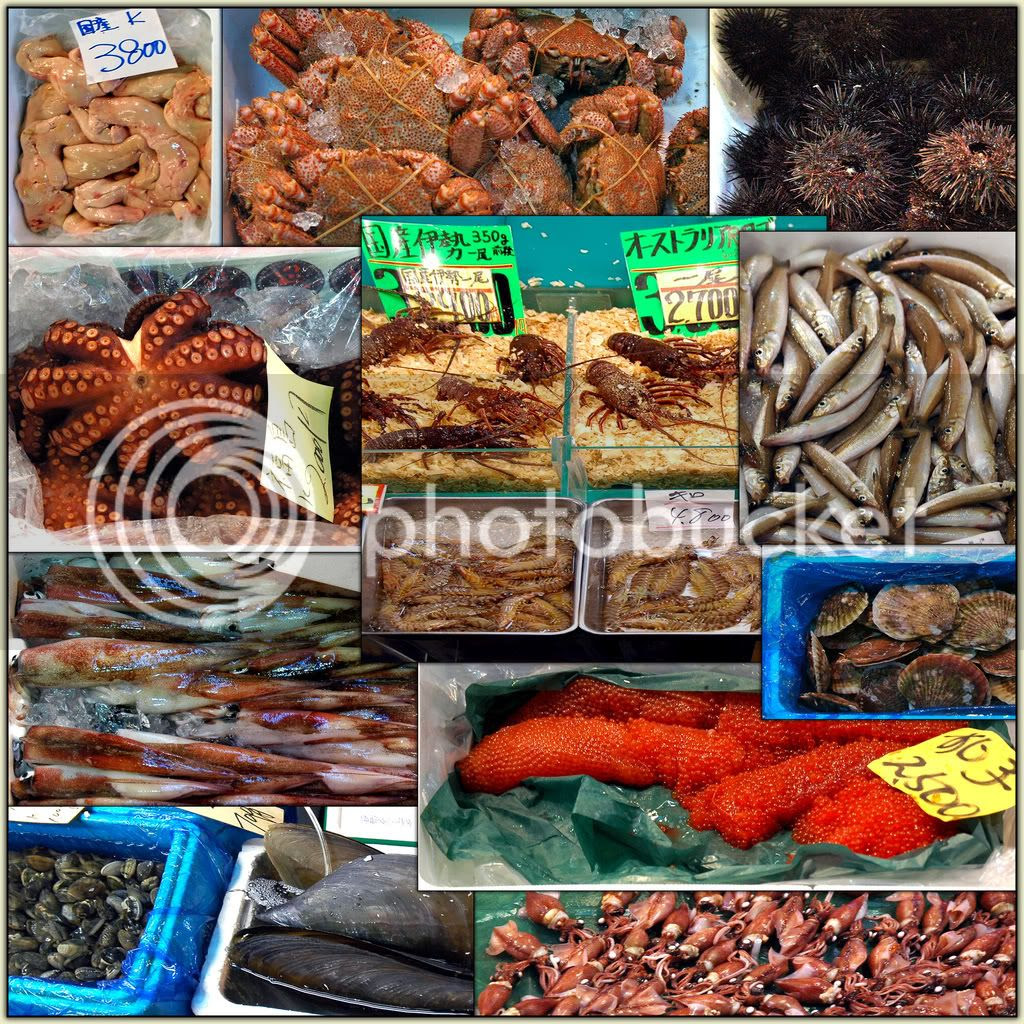 After we spent an hour or so dodging motorized carts amongst the aisles at Tsukiji, we stopped in at one of the local hole-in-the-wall sushi bars for a spot of breakfast, each of us ordering the $35 set menu. The chef then proceeded to hand piece after piece of the freshest, most delicious sushi we have ever eaten (or hope to eat) across the bar. O-toro (fatty tuna belly). Ika (squid). Ama-ebi (shrimp). Tamago (sweetened egg omelet). Uni (sea urchin gonads). Tai (red snapper). Anago (eel). Ikura (salmon roe).

Every single bite was a revelation. It just doesn’t get any fresher than this, unless you haul your catch right onto the boat, hack slabs off the side of the still-living fish with a santoku knife, and gobble ’em up on the spot.

Both Elder Daughter and I are spoiled now. The kind of sushi you get here in the States just doesn’t do it for us the way it used to...because we have been to the Sushi Mountaintop, from which the view is incomparable. But that won’t stop me from hitting the local sushi bar tonight with SWMBO, the Mistress of Sarcasm, and her boyfriend Gilad.

SWMBO and the Mistress love sushi almost as much as I do. And Gilad? Well, he’d better learn to.

As for me, I’ll be waiting for dinnertime...with baited breath.