Yesterday, as I traipsed out to the mailbox to retrieve the day’s pile of worthless bulk advertising, real estate offers, solicitations for mortgage refinances, threats from creditors bills, and slick catalogs, I almost stumbled ass-over-teakettle over a box that was conveniently placed just outside our side door.

“Goody!” thought I to myself. “An unexpected package!”

Most of the time, I like the unexpected package. This is probably a stupid attitude to cop in the early 21st century, what with mail bombs and other Pleasant Surprises, but since most of my experience with unexpected packages has been good, I approach them with pleasant anticipation, not dread.

A quick look at the return address established that my brother, that most esteemed Other Elisson, had sent the package. But whatever could it be?

Turns out that, buried in a nest of bubble wrap (Oh boy! Bubble wrap!), was a small paper sack filled with a substance I had never even known existed.

The Philosopher’s Stone? Spanish Fly? No, silly! (I already knew about those.)

It was Black Cocoa, from the same folks in Vermont who bring you King Arthur Flour.

Seems that my kid brother, when he was up in Vermont taking his Hot-Air Balloon Ride a few weeks ago, stopped in at the King Arthur Flour flagship store in Norwich. King Arthur is revered by Bakey People as the producer of some of the best flours on the planet, a statement I’m sure will be backed up by the Bakerina, who has taken professional breadbaking classes at the King Arthur compound.

The Black Cocoa caught his eye and he immediately thought of me...because let’s face it, them as know me know I have a most powerful Chocolate Jones much of the time, as well as an appetite for the unusual.

According to the package, Black Cocoa should generally be used in combination with another type of cocoa (e.g., regular or Dutch-process cocoa) due to its distinctive - perhaps overpowering - flavor profile. It’s used to make cookies such as Oreo™ and Famous Chocolate Wafers™ and is the reason those cookies are almost black in appearance.

Just for the hell of it, I decided to compare this mystical Black Cocoa with the boring, normal-ass variety of cocoa I keep in the Pantry d’Elisson. I opened the sack... 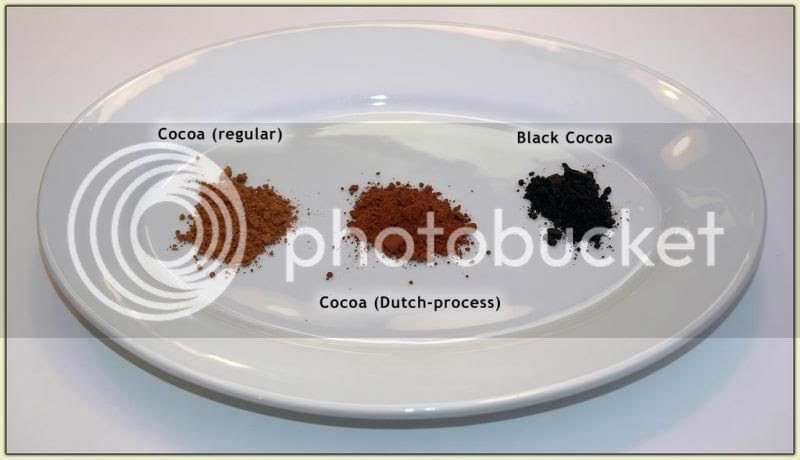 ...and lo and behold! This shit is as black as the ace of spades! Well, not quite. But it is a very dark brown, reminiscent (for obvious reasons) of the color of an Oreo cookie. Makes the other cocoas look positively wimpy by comparison.

I can’t wait to try it. Perhaps a nice batch of Black Cocoa cookies will demonstrate its awesome powers...

I just made a batch of Mexican Chocolate Icebox Cookies, using half Dutch-process and half black cocoa. These cookies come out dark enough when made with Dutch-process cocoa, but with the black cocoa thrown in they are like chips of asphalt, inky and mysterious-looking. Delicious, too, with a subtle Oreo-like flavor note.

But working with that stuff in the kitchen is a challenge. It’s like Carbon Black...gets everywhere. Yeef!

Sift together the flour, cocoa, cayenne, black pepper, salt, and cinnamon; set aside. In the bowl of an electric mixer fitted with paddle, cream the butter, then add the sugar and vanilla and beat until well-mixed. Add the egg and beat in well, being sure to scrape down the sides of the bowl with a rubber spatula periodically. With the mixer running on low speed, gradually add the sifted dry ingredients and beat only until incorporated. The dough will try to climb up the beaters; if this happens, scrape it off and keep beating.

Flour a large board (and your hands) and form the dough into a 10" cylinder; wrap in aluminum foil or plastic wrap and freeze for at least an hour....or as long as you want. The log will keep for months.

When ready to bake, preheat oven to 375°F and arrange oven racks in the middle third of the oven.

Using a sharp knife, cut the dough cylinder into 1/4"-thick slices and arrange on a cookie sheet. The cookies will expand when baked, so leave enough room when placing them on the sheet. Bake for 10-11 minutes, turning the sheets and switching them from one rack to the other halfway through in order to ensure even baking. Remove from oven and, using a metal spatula, transfer immediately to a cooling rack.

Try not to eat the whole fucking batch at once. It won’t be easy.
Posted by Elisson at 4:22 PM