She Who Must Be Obeyed and I are preparing for another out-of-town weekend...this time in Washington D.C., capital of our nation and, not incidentally, the new home of Elder Daughter. We’ll be hanging with E.D. and her boyfriend Khody - this is our first opportunity to visit their new digs just a short way from the National Zoo.

A number of years ago, we had stopped in the D.C. area enroute between Momma d’SWMBO’s residence in Atlanta and our home in Connecticut. We had planned a family trip to the National Zoo, but our plans were derailed when Elder Daughter took ill. Ever the Dutiful Daddy, I stayed in the hotel with Elder Daughter while SWMBO took the Mistress of Sarcasm to see the menagerie. By which I mean the Zoo, not Congress.

It’s a mitzvah - a sacred responsibility - to comfort the sick; even more so when the sick one is one’s own offspring. Wastebasket at the ready, I was there to assist my little girl when she suffered through intermittent bouts of nausea and Productive Retching, despite my notorious aversion to Things Vomitrocious. It was a real Daddy Moment: one that, perversely, I am today able to treasure when viewed through the misty lens of memory.

But enough of this Nostalgia. Enough, I say!

The iPod d’Elisson is - much like the stomach flu-afflicted Elder Daughter - eager to spew forth its weekly Random Assortment of Tunes ’n’ Such. Quick, get the wastebasket!Say, should I give my buddy Bill a call? Since we’ll be in the neighborhood, I mean. 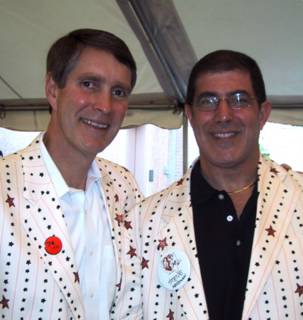 It’s Friday. What are you listening to?
Posted by Elisson at 10:18 AM