TEN YEARS BEFORE THE MAST

...is not half as pants-pissingly exciting as ten minutes atop one. 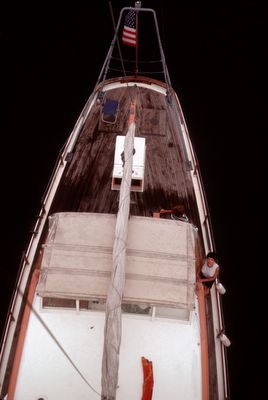 It’s the summer of 1969, and while hundreds of thousands of Freaky Peepul are gearing up for a certain three-day music festival in upstate New York, I’m sailing the Long Island Sound with my friend Walter (he of the Infamous Vermont Applejack Escapade); his two sisters and mother; his dad, the former Water Cop; and the improbably-named Gilbert Joynt. We are on the Lucayo, the 62-foot pride of the Long Island University Oceanographic Fleet, said fleet being commanded by Walter’s dad. (You can take the cop out of the water, but you can’t get the water out of the cop.)

And at some point in the proceedings, I take it upon myself to get in the Bosun’s Chair and ride up to the top of the mainmast, egged on by Walter and Gib.

Holy Shit! When you get to the top of the mast, you discover two things very quickly: One, the most minute rocking motions of the vessel are enormously magnified by the long lever-arm effect of being atop a forty-foot mast; and two, that mast is Enormously Fucking High Up There.

I was not quite, as Stephen King might put it, “bullshit with fear,” but ten minutes up there was about all I could take without pissing myself. After snapping off a handful of photos with my trusty 35mm, it was back to Decka Firma for me!
Posted by Elisson at 9:51 PM