FROM THE ELISSON ARCHIVE, A RFOAC 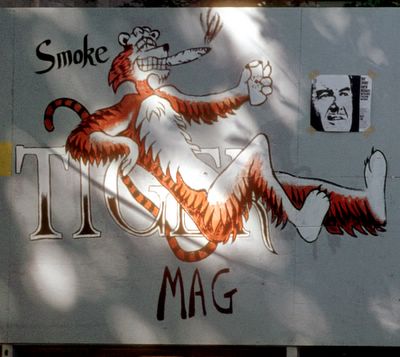 Two years prior, there had been a fire at Whig Hall, one of a matched set of Greek Revival buildings named after the 19th century Whig and Cliosophic debating societies. When it came time for the hall to be gutted and rebuilt, a plywood barrier was erected to keep wayward passersby out of the construction zone.

It was perhaps a Sign o’ the Times that the University, rather than trusting to random Graffiti Taggers, elected to have an official Paint the Wall festival. Students could sign up for a panel of the wall and decorate it as they saw fit. The result was...well, a lot of Peace and Love crap...but what did you expect from the early 1970’s, anyway?

One panel stood out, however, with its advertisement for the Tiger, the campus humor magazine. The magazine’s mascot was, naturally enough, a tiger, here rendered by two undergraduates, one of which just might have been Yours Truly.

Holy Crap, is that tiger drinking a can of Iron City beer - and smoking a spliff?
Posted by Elisson at 3:55 PM

Labels: From the Elisson Archive