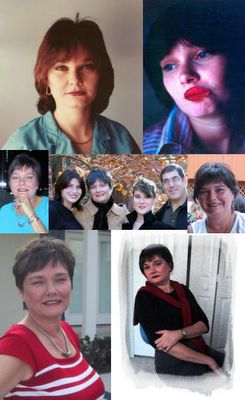 Twenty-eight years seem to have passed like a dream.

In that time, you have given me two wonderful daughters, both now college graduates. We’ve lived in seven different houses. We’ve each buried a parent. We’ve taken vacations, watched school plays, gone to PTSA meetings, run to soccer games and doctors. Laughed. Cried. The whole gamut of emotions, from turkey sandwich-throwing anger to the tenderest sweetness.

We finish each other’s sentences and think of the exact same things at the same time. Was it only last night that we were watching the news on TV and something the announcer said had us simultaneously singing the same stupid “Salagadula Mitchicabula” song?

We speak our own private language.

We make each other laugh. Did I say that already? It’s the key ingredient to a successful marriage.

If I had to do it all over again, I wouldn’t hesitate. Not for a New York second.

You got any plans for the next twenty-eight?
Posted by Elisson at 12:01 AM