...in the history of comics was not “Batman meets Superman,” “Superman versus Spider-Man,” or even those American Express web-o-mercials featuring odd-couple buddies Jerry Seinfeld and Superman.

No, it’s gotta be the Family Circus panel below, from the March 7, 1995 Houston Chronicle: 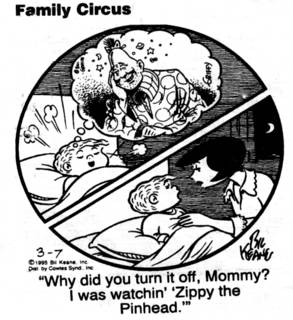 Billy has a genuinely bizarre dream.

My reaction when I first saw the panel was utter astonishment. Here’s Bil Keane, who has been doing the same basic series of punchlines for the last three decades – the dotted lines, the dead grandpa, Billy draws the strip when Bil takes a vacation, Not Me, et cetera, ad infinitum. And BANG! – here’s Zippy the Pinhead, complete with a head-circling nebula of stars and planets to indicate his not-of-this-Earth state of consciousness, filling up Billy’s balloon o’ dreams.

One question that occurs to me is, who thought this up? Was it Bill Griffith? Or was it Keane? Perhaps the Cowles Syndicate or Hearst marketing people, casting about for ways to tie together two very disparate demographics: middle-aged parents with small children, and snarky urban hipsters? Who the hell knows?

In a way, Zippy doing a guest shot in the Circus makes perfect sense - if you subscribe to Zippy’s worldview. Looked at from the other side, do those dotted lines ever snake their way through Levittown?

Keane has way more going on than I ever gave him credit for, was what I thought at the time. And he still might. One of these days, Billy and Jeffy and Dolly may suddenly evince an unexplainable desire for Ding-Dongs and taco sauce.

Are we having wacky juxtapositions yet?

[Editor’s Note: I originally posted this back in August, 2004 when this blog was young. I decided to yank it out of the archives because if you haven’t seen it - and it’s highly unlikely you did - it’s new to you!]
Posted by Elisson at 1:00 PM