A recent post at Inblognito inspired me to do something I will likely regret: run over to Starbucks (“Your Favorite Megalithic Corporate Caffeinator since 1971!”) and try their new Obscene Beverage. Which I did. But in the process of writing the Inevitable Blogpost About the Experience, I went back to Inblognito to snag the link...and I stumbled across a new post about tornadoes.

Queenie has had more experience than Clan Elisson with these things. In fact, there have been only three occasions when we have seen the Finger o’ Gawd dip down from the sky, and none of those qualify as Big-Time Tornado Sightings. And yet...

But a scant two hours before the reception, a violent thunderstorm struck, sending a telephone pole through the plate-glass window of the motel restaurant where our friends had been sitting just minutes before. We saw no funnel cloud, but the event had all the hallmarks of a mini-tornado touchdown.

Occasion Two was in the Bahamas in 1983. We were water-skiing off Paradise Island (perhaps “attempting to water-ski” is more accurate) and suddenly, three waterspouts appeared in the distance. As they moved closer, we got the hell out of Dodge and watched from the shore as one ’spout tracked parallel to the beach...just a wee bit scary.

Occasion Three was during our annual Destin vacation, July 2003. The weather sucked almost all that week, but nothing is quite as “sucky” as a waterspout, one of which we watched from our second-story terrace in a combination of horror and fascination. Waterspouts, of course, are dinky-ass things compared to land-based tornadoes, but still, nothing to sneer at. They’re still the Finger o’ Gawd. 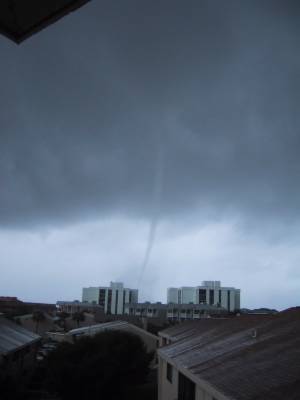 But tornadoes, like all Great Forces of Nature, lurk in the very base of our brainstems at the most reptilian level of cognition. And so they come to me at night, in bizarre dreams, dreams that are at once terrifying and exhilarating.

When I read these lines by Queenie, I knew that the post on the Obscene Beverage would have to wait:

I know that tonight I will have tornado dreams, where funnels slip menacingly through lowering, blackened skies, chasing me and my bags full of neuroses with far more intent and malicious purpose than a real tornado ever could.

Yes, I read those lines, and thought: “How does she know about my tornado dreams?” Because I have them, you know. And maybe you do, too.

Tornado dreams. The sky is black, splashed by lightning, heavy. And then the funnels come, snaking down through the air like worms. And there are hundreds of them...

Tornado dreams. Tsunami dreams. Somewhere buried deep down in our deepest subconscious, they’re there, where the elemental forces of the planet resonate. But they don’t stay buried, not for me. Once a month, maybe, they will drift to the surface, and I will wake with those mingled feelings of fear and excitement. And I will want to go back to sleep to see what happens next.