THE ENCLOSURE OF LASSITUDE

Some of my Esteemed Readers will remember my run-in with the infamous Cone of Stupidity.

Now that there’s another Cat Enclosure in the house - one with a convenient neck-size opening - you might find yourself asking whether this new device has similar Stupidity-Inducing Effects.

Let’s find out, shall we? 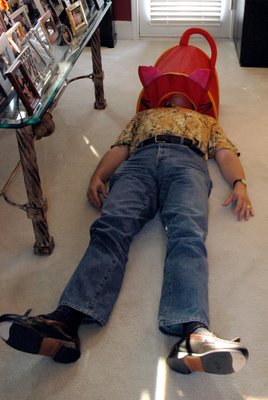 Well, no obvious impact on the old IQ - unless it is manifested in the desire to post a photograph as stupid as this one.

For some strange reason, later that day I was seized by a strange lassitude, a case of the Logy Worn-Out Ass that resulted in my going to bed by 9:00. I haven’t gone to bed that early since I was recovering from surgery.

It’s gotta be the tent. Sucks the Life-Force right outta you.

It can only be...the Enclosure of Lassitude!
Posted by Elisson at 3:05 PM