TALK DIRNDL TO ME 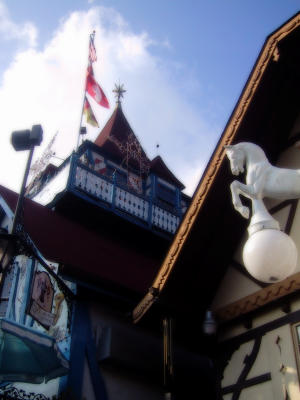 The little city of Helen, as a self-proclaimed outpost of Alpine Civilization in the sacred mountains of North Jawja, has more Kitsch per Square Inch than most places on this side of the Watery Atlantic.

Think about it. Kitsch. The very word has a Teutonic cast to it.

Yes, the Germans are not only the fine folks who brought us the Volkswagen, the Daimler-Benz, the Leica camera, World War II, and the Holocaust, but they also have gifted the world with Kitsch. And Helen, a place to celebrate All Things German (the good ones, anyway!), does its share of celebrating Kitsch.

Last week, She Who Must Be Obeyed and I visited Helen to attend the Southeast Writers’ Trinkenfest Conference:

Upon our arrival Friday night, we headed down to the Festhalle in search of Blodgers. What we found was Kitsch Incorporated: Oompah bands, the Chicken Dance, the Hokey-freakin’-Pokey, and a magnificent Oktoberfest hat that featured a three-dimensional Girl in Low-Cut Dirndl, complete with enormous Kalamatunis, and a frothy beer stein in each hand.

And there was more. Saturday afternoon, to take a short break from Liver Destruction- and Brain Cell Immolation-Related Activities, SWMBO and I joined Moogie (rhymes with “Three Stoogie,” I discovered), Leslie, and Buckaroo Bonsai (great name for a broccoli farmer, innit?) to go on a Kitsch Hunt in Downtown Helen. We were not disappointed.

Watches and watchbands so hideous that Moogie was practically peeing herself with laughter.

After a few hours of this - Buckaroo, you are a freakin’ saint, don’t ever let Leslie tell you otherwise - we grabbed some dinner at one of the Local Germanic Food Emporia. Sauerbraten. Spaetzle. Wienerschnitzel. Jägerschnitzel. Armpitzelschnitzel. All of this washed down with lashings of strong, cold Triple Bock.

And the Moogster carved a couple of notches on her Culinary Belt, having tasted marzipan and spaetzle for the first time. (Not together, of course.)

Now, if I could only find one of them hats like we saw at the Festhalle - the one decorated with the big-titted Girl in the Dirndl. That might even kick the Cymbal-Clashing Monkey’s ass.
Posted by Elisson at 5:11 PM