CARNIVAL OF THE COCKROACHES - PREMIERE EDITION

Welcome to the first-ever Carnival of the Cockroaches!

And, just as roaches need love, so also does the Bloggy-Sphere need another Carnival. If Cats and Capitalists can have Carnivals, why not Cockroaches?

A wee bit of clarification is in order. Unlike the warm, fuzzy Carnival of the Cats, we’re not after photographs so much as we are spine-tingling Horror Stories of your adventures with our Little Insectoid Friends. Of course, photos are acceptable - nay, welcome - but it’s prose we are really looking for.

With that in mind, let’s begin, shall we?

First off, we have GuyK of Charming, Just Charming, who has taken this whole Roachy Business to heart. Here, he explains all about Florida’s favorite roach, the Palmetto Bug, which is to a regular old German cockroach as a Sherman tank is to a Volkswagen Beetle. And in this post, he reminds us that there is more than just one kind of Roach.

Let me introduce our next contributor, Rory, of What Not To Do in Australia! I first discovered Rory when I stumbled on his recipe for Fucked Up Soup. (Back then, he was living in South Korea, where pretty much any soup you make from the Local Ingredients is going to be Fucked Up.) In this fine post, Rory shows us that he is a Talented Artist - not just someone who can Drink Enormous Quantities and Cook Weird Shit. If I ever get to Oz, I have got to meet this guy.

Cowtown Pattie, who writes at Texas Trifles, is a Blog-Buddy of long standing. Pattie has the double distinction of being my first commenter as well as the first Bloggy Individual I ever met F2F. Such a lovely lady - I’m amazed (yet pleased) that she is twisted enough to contribute to the Roachy Proceedings here. But then again, she does live in Texas, where the roaches are so big, they don’t so much kill ’em as name ’em. Go and read her terrifying little story.

Velociman is acknowledged by many to be the Mark Twain of the Jawja Blodgers, despite the fact that he currently lives south of the border in Jacksonville. Here, he writes about earwigs in this tasty little missive...but we all know they was really cocky-roaches, now, don’t we? I said, don’t we!??!

Ivan G. Shreve mostly writes about the Thrilling Days of Yesteryear, but sometimes he deals with more contemporary matters relating to his day job - a job that occasionally brings him into contact with our Six-Legged Buddies.

As many of us know, Rob Smith, the Acidic One his ownself, will be entering the hospital tomorrow for an intensive six-week program of cramming all his shit into one sock. To make sure our thoughts of Rob stay fresh and happy, I’m taking it upon myself to link one of his Palmetto Bug-related posts: this story of a Fight to the Death. A most appropriate choice of story, as Rob begins a Fight for his Life. I’m therefore dedicating this first Carnival of the Cockroaches to him. 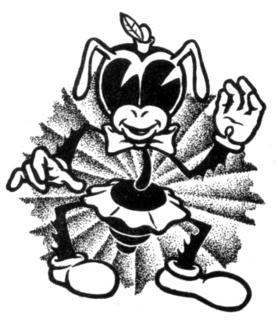 Well, Esteemed (and by now, Grossed Out) Readers, that about wraps up the Premiere Edition of the Carnival of the Cockroaches. My associate here, Coochy Cootie, tells me that if there is continued interest, he’ll help me keep this Carnival going as a regular feature - so keep those cards, letters, and e-mails coming in! All three of you.


Linked to the TTLB Übercarnival.

[Coochy Cootie ©1970 by Robert Williams. Used without permission...but with extreme respect and admiration!]