Today is Dick Tracy’s 75th birthday, Chester Gould’s venerable strip having made its debut on October 4, 1931.

It was a different world then, a world in which 2-Way Wrist Radios were a futuristic dream, a world in which the Internet was inconceivable and global terrorism unimaginable. Tracy was tough, but he probably would have shit a blood clot in today’s World o’ Crime and Horror.

Or maybe not. The new Dick Tracy strip was violent in a way previous “funny pages” strips had never been. This was, perhaps, a reflection of the times, with Prohibition-era gangland violence in full flower.

Dick Tracy had plenty of bizarre bad guys to deal with. Batman may have had his Joker and Penguin*, but Tracy had a veritable Rogues’ Gallery of Villains running roughshod through his newsprint world. From Don Markstein’s Toonopedia:

The Tracy strip quickly became famous for more than just its unflinching use of gunplay. Its villains soon became proverbial for their bizarre deformities. The Blank (1937), Little Face Finney (1941), Pruneface (1943), The Brow (1944), Shakey (1945), Pear Shape (1949) - these are only samples of an endless parade of memorably ugly criminals defeated by Tracy. So recognizable was the Tracy style of villain that when, in 1946, Daffy Duck came up against Jukebox Jaw, Pumpkin Head and Neon Noodle, viewers would have known who was being parodied even if Daffy hadn’t done it under the name “Duck Twacy.”

Here are a couple of panels from a 1934 “Dick Tracy” strip, illustrating Gould’s earlier style:

This second Sunday strip – a half-page, just like the 1934 strip – shows Gould’s work in its more mature, hard-edged form. Tracy now has that famous 2-Way Wrist Radio (later a wrist TV) – one little example of anticipated technology that was first introduced in 1946. 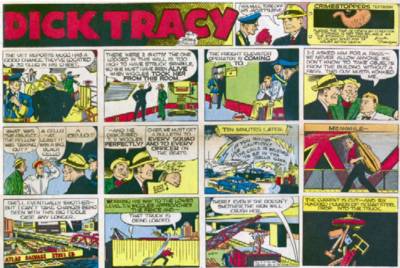 Later, Tracy would explore strange science-fictional plotlines. Anyone remember Moon Maid? Diet Smith’s Space Coupe? The strip’s unfortunate “Space Period” that started in 1964 and effectively died out in 1969 with the first (real life) Moon landing was not one of its high points, threatening to turn what had been a hard-boiled urban police drama into a cartoony James Bondish soap opera. Fortunately for Dick Tracy readers, Gould brought Tracy back to Earth.

Chester Gould retired in 1977, whereupon his strip was taken over by a succession of successors, some more successful than others. Max Allan Collins and Rick Fletcher wrote and drew the strip until Fletcher’s death in 1983; Dick Locher took over the artwork at that time. Mike Kilian assumed the writing chores when Max Collins left the strip in 1992. With Kilian having died last year, Dick Locher is now handling both the writing and the artwork.

I no longer follow the strip routinely; the Atlanta paper does not carry it and I don’t care to take the time to hunt it down on the Inter-Webby-Net. To me, the strip lost its essence and guiding light when Chester Gould retired, and that’s the Dick Tracy I’ll remember. But at 75, old Dick is still going strong.

And since we share a birthday (along with excellent taste in headgear), I guess I’ll always have a warm spot in my heart for Dick Tracy.

[* The Penguin is mightier than the Swordfish. Oy.]
Posted by Elisson at 12:13 PM