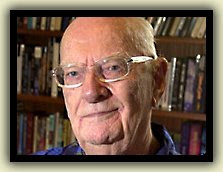 British SF author Arthur C. Clarke has gone off exploring new worlds, having left this one behind at the age of 90.

I will miss Mr. Clarke. While the world at large may remember him best for 2001: A Space Odyssey, the landmark Stanley Kubrick film for which he co-wrote the screenplay, he has created many other fine works. The very first science fiction novel I can recall reading, way back in my Snot-Nose Days, was Childhood’s End, a book that I will still pick up from time to time. As often as I’ve regretted that no film version of this SF classic has ever been made, I realize that Hollywood invariably takes great literature and reduces it to garbage...so it’s just as well that the only movie of Childhood’s End I will ever see is the one that plays in my own head.

Communications satellites? They’re part of the landscape (spacescape?) these days, but Clarke wrote about them long before Telstar was a glint in the eye of some engineer at Bell Telephone Laboratories.

One of my favorite Clarke quotes: “Any sufficiently advanced technology is indistinguishable from magic.”

Ave atque vale, Mr. Clarke. May you now uncover the secrets of the Universe you wrote so eloquently about.

[Tip o’ th’ Elisson fedora to Laurence Simon, who sees dead people...or at leat hears about ’em faster than I do.]

Update: Og - who actually met Clarke and later carried on an e-mail correspondence with the Great Man - has written a fine memorial post. Check it out.