LIFE OF THE POTTY

You, too, can be the Life of the Potty with this Extra Tasteful Hallowe’en Costume.

What sort of chucklefuck would allow his or her child to dress as a Shit-Repository for the annual Trick-or-Treat festivities? What sort of self-esteem issues must be boiling in this poor child’s dark and twisted psyche? I ask you.

Why, the mind fairly boggles. It’s a slippery, shit-slick slope, my friends. Next thing you know, there’ll be a WC-Themed Restaurant. Where will it end?

Now, if I had a rotten sort of mind, there would be no limits to the Photoshop Fun I could have with an image such as this. But photoshopping, say, someone else’s head onto this photo is too easy. Plus, it smacks of gilding the lily.

For once, I will exercise restraint. Alas, some of my Esteemed Readers (I do not name names) may not show quite as much restraint and discretion.

The question has been raised, “What do you give a child who shows up at your front door on Hallowe’en wearing a costume such as this?” 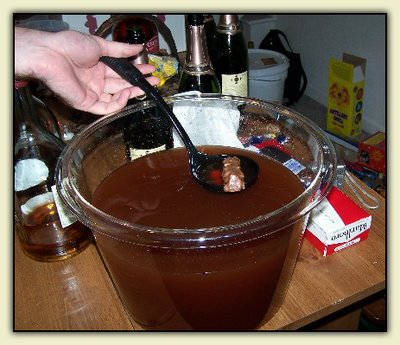 [Tip o’ th’ Elisson fedora to Laurence Simon for the link.]
Posted by Elisson at 12:33 PM