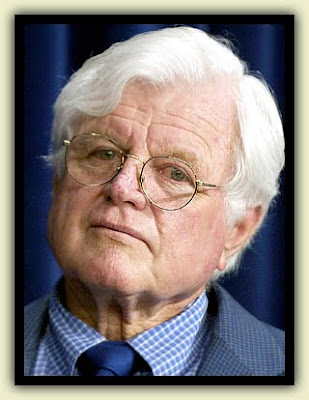 Senator Edward “Teddy” Kennedy, the last of the Brothers of Camelot, has died at the age of 77 after his year-plus-long bout with brain cancer.

The youngest of the four sons of Joseph P. Kennedy Sr., Ted was the only one to survive past the 1960’s. Like his elder brothers, he had Presidential dreams... but any hope he may have had of succeeding to his brother John’s place in the White House was drowned in the cold waters off Chappaquiddick forty years ago last month.

Despite the ensuing scandal, he became an effective senator, beloved by his constituents and able to work both sides of the aisle. His latest - and, as yet, uncompleted - mission was to reform this country’s health care system. But Kennedy, a co-sponsor of the clusterfuck known as No Child Left Behind, had had previous experience in drafting well-intentioned but completely botched-up legislation. I’m scared to death thinking what kind of health-care reform bill may still get shoved down our throats, especially now that its passage will be seen as a memorial to Teddy.

But I didn’t write this post to badmouth the man. Plenty of other folks will be all too happy to take him to task for his excessive drinking, his philandering, his unwillingness to face the consequences of his actions.

No, I wanted to write this as an excuse to link to the one real Teddy Kennedy story I have... about the day I sat in Teddy’s Senate seat. Literally.

Teddy, ave atque vale. No need to pack your woolens - I suspect you won’t need ’em.