OF JEWS AND HORSES 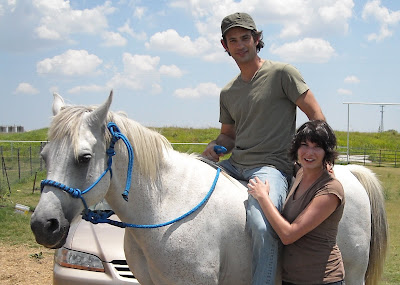 Gilad, the Mistress, and Con Man.

Gilad, here, looks natural atop Con Man. I suspect he has a certain amount of natural ability as a horseman. It’s a family trait...and one without which Gilad himself would never have existed.

To stay alive in a Death’s Head Camp, you either had to show the Powers That Be that you were useful, or you had to be extremely lucky. Preferably both. And Gilad’s grandfather Eliezer managed to be both.

Shortly after arriving at Auschwitz, incoming prisoners were asked whether they had any skills. It was a routine question, the answer to which carried life-or-death consequences. If you had job skills, you might be spared. For a while, anyway.

Eliezer, having grown up on a farm, offered up his equine management and riding abilities and was put to work in the camp stables. Failure was not an option. To fail was, literally, to see your career go up in smoke. He did not fail.

Over time, his riding talent began to show itself and he acquired a certain reputation, impressing one of the camp’s higher-ups. At one point, this particular officer even told Eliezer that he had doubts about his ethnicity: “You cannot possibly be a Jew. No Jew could ever ride a horse the way you can.”

A left-handed compliment, to be sure...but the kind of compliment that kept the young man alive in the midst of history’s most horrendous charnel house.

Out riding one day, this same higher-up told a group of his fellow officers that Eliezer could outride any of them. One officer was skeptical. How could a Jew outride an Aryan übermensch? And so Eliezer galloped his mount, leaping over a broad trench. The skeptical officer, not quite as skilled, was unable to negotiate the trench. He broke his arm.

Thanks in part to the efforts of the senior officer who admired his riding skill - but mostly due to his own resourcefulness - Eliezer survived. He remained alive long enough to be forcibly marched out of the camp along with all the other surviving prisoners. The Nazis’ plan was to try to outrun the fast-approaching Russians and massacre the Jews in the woods - a last-ditch attempt to hide the evidence of what they had done.

But the imminent arrival of the Russian army threw their plan into disarray. In the confusion, Eliezer ran away, taking refuge in an abandoned house where he hid...and slept for days. Then, upon awakening, he ransacked the kitchen. Food!

A few days later, while wandering into a nearby town, Eliezer spotted an SS officer from the camp who had disguised himself in the hopes of evading Allied justice. When Eliezer pointed him out, the SS man denied having had anything to do with Auschwitz.

Not for long. Eliezer grabbed a rifle and forced the man to strip, revealing the damning evidence: an SS tattoo. He then marched the man into the center of town in the midst of liberated camp inmates who were too weak from their ill-treatment to even lift a foot to kick him.

Eliezer executed the SS man on the spot.

But he was still alive. He had managed to outlive Auschwitz.

Later, Eliezer would have a family. And his daughter, in the fullness of time, would bear him a grandson. A grandson who, today, sits a horse with a certain barely discernible naturalness...and an untapped reservoir of horsemanship as part of his genetic heritage.